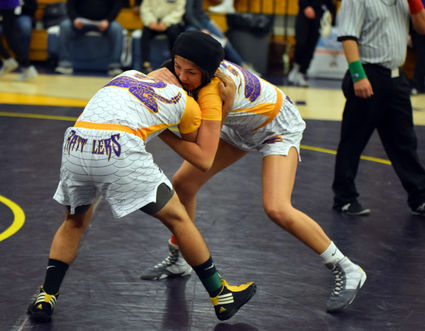 Tucumcari's Aleayah Lucero, right, wrestles against a male teammate during the Rattler Invitational in December. Lucero went on to finish third in the 121-pound girls' weight class during an exhibition at the state tournament in February. The state last week voted to make girls wrestling an officially sanctioned event.

As expected, the New Mexico Activities Association board of directors on Thursday approved girls wrestling as an officially sanctioned sport for the 2019-2020 season.

The number of girls competing in wrestling in New Mexico had more than doubled – to 165 last season – in the last two years. New Mexico became the 18th state to officially recognize girls wrestling.

Exhibition events for girl wrestlers had been held the last two seasons at the boys' state tournament.

The NMAA laid out its plans for girls wrestling this fall:

• Girls will qualify for the state tournament via one of two regional qualifying tournaments;

• Schools will be aligned regionally, keeping current district schools together when possible;

• Each region will qualify four participants per weight class to the state tournament;

• Qualifying participants will compete at the state tournament, with medals awarded to the top three finishers;

• Trophies will be awarded to the top three teams;

"We are very excited that our association will now officially offer a girls' wrestling division that will culminate with a state championship," NMAA Executive Director Sally Marquez stated in a news release. "The sport has been growing fast all across the country, and we are happy to become the 18th state to sanction it."

The coach for Tucumcari, the only school in the region to offer wrestling, said last month he favored the NMAA officially recognizing girls wrestling.

"If they're going to do girls wrestling, I want them to do it right," longtime Rattlers coach Eddie Encinias said before NMAA made its decision. "Whether it's by district or by region, have a way where they can qualify for state. I'm glad they're doing this."

Encinias said he anticipates three more girls from Tucumcari's middle school will compete in high school wrestling in the 2019-2020 season.

"There may be more. After what Aleayah has done, there might be a lot more interest from girls," he said, referring to Aleayah Lucero, who as a junior last season in the 121-pound weight class finished third at the state tournament girls exhibition. She became Tucumcari's first female wrestler to earn a medal.

Encinias said he has no problem with coaching girls.