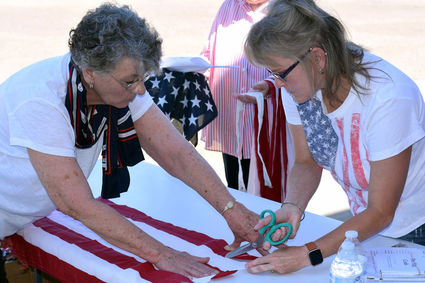 Michelle Farrow separates the red and white stripes of a worn U.S. flag as fellow Daughters of the American Revolution member Susan Taylor helps hold it during a flag-retirement ceremony Thursday at the downtown Tucumcari fire station.

On the morning of the Fourth of July, American flags were cut apart and burned in Tucumcari.

But it wasn't an act of desecration or protest. It was part of a biennial flag-retirement ceremony by the Tucumcari chapter of the Daughters of the Americ...