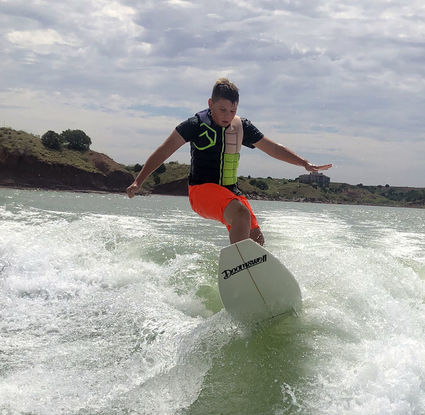 Mason Wallin of Logan shows the form that won the boys 11 and younger division during Saturday's second annual wakesurf competition at Ute Lake.

About 25 people participated in the Beck's Boats second annual wakesurf competition Saturday at Ute Lake, with a Logan boy winning his division.

Mason Wallin of Logan won the boys age 11 and younger division. The event on the south side of the lake near Horseshoe Bend drew competitors from all over eastern New Mexico and the Texas Panhandle.

Here are the winners of the competition:

• 2 to 1: Skylee Isham and Leia Reed of Amarillo

Wakesurfers hold a tow line behind a specially made boat until it reaches about 11 mph, when turbulence settles and riders can ride the wake for long distances.

The event added a new wrinkle: a concert by The Ghost Runners on the water that drew about 100 people.

"We were really pleased with the turnout and were impressed with each competitor's performance," Beck's Boats co-owner Laurie Strebeck stated in an email Monday. "Adding the concert this year following the competition added a really fun aspect that everyone enjoyed. Ute Lake is a special place, and we hope to continue to putting on these fun events for years to come."