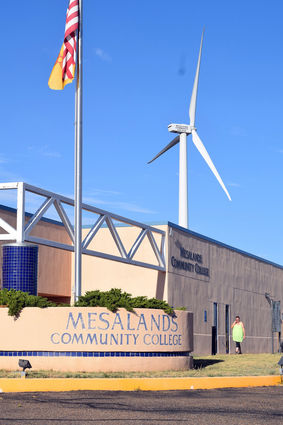 A student walks into Mesalands Community College on Monday morning as the wind turbine at college's North American Wind Research and Training Center turns in the background.

While the Coronado Partners group is far from giving up on obtaining a license to build a racetrack-casino in Tucumcari, the state's recent decision not to grant a sixth "racino" license leaves Tucumcari and Quay County again facing hard uncertainties about their economic future.

In the wake of lingering regrets over the New Mexico Gaming Commission's decision not to grant a sixth license, for which the Tucumcari site was one of five competitors, local economic leaders remain optimistic about the city and county's economic revival.

Like all of rural New Mexico, however, Quay County faces an uphill struggle in its efforts toward regaining vibrancy in its economy, they agreed.

"It's tough to do economic development in agricultural areas, because it's all going to more urban areas," said Christopher Erickson, a New Mexico State University economist who compiled reports for Coronado Partners in its attempts to bring a racino to Tucumcari.

Erickson said the racino in Tucumcari "would have been an obvious fit."

Tucumcari and Quay County, he said should be searching for "an attraction," that would draw people to the area. The racino would have served as that kind of lure.

Tucumcari and Quay County have continued to lose population and continue to suffer economic decline. The county lost nearly 9% of its population between 2010 and 2018, according to current U.S. Census estimates. Nearly one of every four Quay County residents, 23.6%, lives in poverty, and 37.5% of its residents younger than 18 old are impoverished, according to Census data.

In Quay County, 47% of the population 16 years old and older were in the work force. The state's rate was 58%.

The census bureau reports 15.4% of Quay County's population younger than 65 have a disability, compared to the state's 10.4%.

More than a decade of drought conditions has decimated agriculture in the county, according to Pat Vanderpool, executive director of the Greater Tucumcari Economic Development Corporation.

"We used to have farm implement stores in the Tucumcari area," he said, "but those went away.

An informal survey Vanderpool conducted during a series of "Lunch and Learn" sessions from March 18 to May 20 revealed local people interested in economic development saw problems with grocery supplies, housing, a lack of local contractors, a lack of medical specialists and schools (which were also listed as a strength) posed obstacles to growth in the county.

Others see a small workforce in the county as another deterrent to growth, even as Vanderpool can point to the county's status as a "Work Ready Community," as defined by numbers who have achieved satisfactory scores on Work Keys, a work skill assessment devised by ACT.

ACT is the nonprofit company that publishes the ACT test familiar to high school graduates.

The county's economic decline seems to continue despite assets that Vanderpool, Erickson and others can quickly tick off.

• Tucumcari's location on Interstate 40, which crosses the continent, and on the route of U.S. 54, which extends from central Illinois to El Paso, Texas

• The busy Union Pacific Railroad tracks and sidings that split Tucumcari's north and south sides. Tucumcari was once a major railroad hub.

• Tucmcari's well-preserved stretch of Route 66, which draws nostalgic domestic tourism and fans of the Mother Road from all over the world.

• Plenty of wind and sunshine for renewable energy development.

Groesbeck is encouraging Mesalands' involvement in outdoor equipment, but his current ambitions for the college also include expansion of the North American Wind Research and Training Center to include solar energy education and training, and a hands-on media center to develop skills in film, video production and web design.

Groesbeck is also seeking to expand agriculture and agri-business education at Mesalands, and increased use of the college's science laboratories.

In addition, he plans make Mesalands a resident campus, one that hosts students from elsewhere who live in the area while studying.

He also seeks to make Mesalands a center for developing entrepreneurship, teaming with Vanderpool to adapt the former ALCO store's 40,000-square-foot site to be a "business incubator," a low-cost space that new or expanding businesses can use to launch new ventures.

Groesbeck, an economist by education, said a study done in recent years, for him, solved an old "chicken-and-egg" problem for economists: "What comes first, people or jobs?"

People equate to a workforce, he said.

"What's the first thing someone looking for a factory site or a large facility looks for in an area?" he asked, answering, "a workforce. If it's not there, they don't go there."

The next question for Quay County, he said, echoing Erickson, is, "What attracts people to Quay County?"

His plans to recruit resident students at Mesalands, coupled with other features he said the county should be actively marketing, should be attracting more people to the county.

The county's attractions, he said, include scenic beauty, a pleasant climate, Ute Lake and Conchas Lake nearby, and the presence of a hospital, the community college and golf courses, including the Tucumcari Municipal Golf Course and courses at Ute and Conchas lakes.

"What are we doing to market the amenities of Quay County?" he asked.

Locally, he said, the city and county should "prime the pump" with "good government, community pride and leadership."

Groesbeck also agreed with Charles Lehman, treasurer of the New Mexico Career Development Center, and Robert Grassberger, a professor emeritus at the University of New Mexico, that Tucumcari is among many rural New Mexico cities and towns that would make excellent retirement communities.

Vanderpool met Grassberger and Lehman at a recent conference on the prospect of retirement communities in New Mexico. Among the subjects discussed was developing a "Certified Retirement Community" designation for New Mexico municipalities.

Lehman particularly noted Mesalands as an attraction for retirees.

"Research shows that retirees look for a community college" when they seek out their retirement homes.

In addition, Tucumcari offers the nostalgia of old Route 66, a collection of museums, a reasonable climate "free of earthquakes and hurricanes and only a rare threat of tornadoes," its low cost of living and low property taxes.

In addition, he said, "More retirees are seeking rural lifestyles. They don't want to go to urban areas like Albuquerque and Santa Fe."

Grassberger said the state as a whole could benefit from an effort to keep retirees in-state, especially as the meaning of retirement is changing to include alternate activities and ventures as well as leisure.

"Retirees are two to three times more likely to start a company than a millennial," Grassberger said in an interview with New Mexico Business First. "And why wouldn't they? They have the knowledge, they have the resources and they have the time."

While most community leaders see the possible end of the racino dream as a major setback, they also seem to agree that, as Vanderpool noted, "It doesn't mean the end for Tucumcari" or the county.