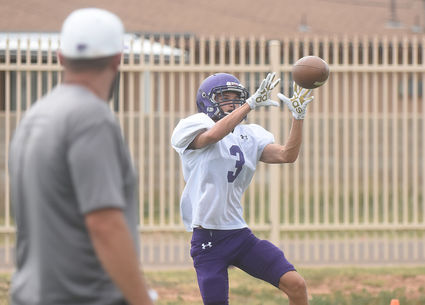 Clovis junior Braiden Romero hauls in a pass during a drill at Monday's Wildcat football practice. Clovis opens its season with a pair of home games, starting Friday with Hobbs.

CLOVIS — The night of Nov. 2, 2018 might be one the Clovis High football team may want to remember as among its best of last season.

Yes, the ’Cats did lose their final regular-season game and missed out on handing La Cueva its first loss of the season. Instead, the Bears prevailed and went on to become undefeated state 6A champions while Clovis was one-and-done in the playoffs and wound up 4-7.

The Wildcats, though, were not only in that early-November game at Leon Williams Stadium, but by squandering chance after chance to pull away, it seemed to be a game they should’ve won. And a performance like that, especially with a solid contingent of returning players, may bode well for the 2019 Clovis team, may indicate the ’Cats are ready to contend.

“It shows the guys that are returning how close we were to actually being right there last year,” Clovis’ third-year head coach Cal Fullerton said. “A La Cueva team that was an undefeated state championship team, and we played ’em down to the wire, and we probably should’ve beat ’em. But they squeaked out some close games and they know how to win football games. And that’s where we need to be — learn how to win close football games and finish games off.”

They’ll get their first chance at a 2019 victory when Hobbs visits for Friday night’s season opener. Making his second consecutive opening-night start at quarterback is Chance Harris, now a junior. Harris showed a few signs of inexperience last year, but was sharp for the most part throwing and running the football.

The game has slowed down considerably for him, but he won’t slow down for opponents. If anything, Harris should be more dangerous with a season of starting on his résumé, and the improvement should be noticeable.

“A huge difference,” Fullerton said. “Chance is leading us right now the right way. He’s heads and shoulders above where he was last year, and he was very good last year as a sophomore. It’s pretty exciting watching him out here at practices. You ain’t gotta say much to him because he knows exactly when he messed up, and it doesn’t happen very often.”

If Harris can help make the Wildcats’ offense crackle, they could be in for a special season. That unit was at times inconsistent last year, getting shut out at Manzano 19-0 on Oct. 12, and scoring just two points against Lubbock Cooper on Sept. 28, after notching seven against Lubbock Coronado a week earlier.

There was also the seven-spot they mustered in that regular-season finalé against La Cueva. But Clovis expects better days this season.

Despite all the returnees on offense, one position that will be in flux is running back, with the likes of DeMarco Fitch, Montez Wright and Andrew Jaramillo having moved on. But fear not, say the Wildcats, who are confident that junior Jeston Webskowski can step up and be their main rushing threat.

“I think he could help us a lot,” Jimenez said.

Webskowski is pumped for his opportunity, but also about the team’s chances in general.

“I’m very excited,” he said. “Everything’s coming together. We’re just looking real good overall on both sides of the ball. It’s going to be a good one.”

Excitement seems to be the common theme among the Wildcats.

The pieces could be in place for Clovis’ first winning season since 2016, and perhaps a deep playoff run.

“It’s possible,” Fullerton said. “It’s a long season. ... If things go right and we keep getting better each week, we’re going to have a chance to be around, get into the playoffs and hopefully make a little run. But that’s a long way off and there’s a whole lotta work to do before then.”

Key game on schedule: The opener against Hobbs, Aug. 23 at Leon Williams Stadium.

“I gotta say Week 1,” Fullerton said. “It’s a must that we get off to a good start because of how hard our schedule is. I think we have the hardest schedule in the state.”