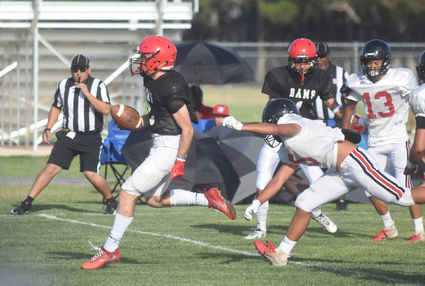 Portales' top receiving threat coming into 2019 is Kellan Hightower, who had seven touchdowns last season for the Rams with 26 catches for 696 yards.

PORTALES — A quick look at Class 4A football in the Land of Enchantment looks like you’re playing a dice game, with four different title winners in each of the last four seasons.

The better gambling metaphor, however, would be the World Series of Poker. Whatever cards get dealt, the same people always seem to find their way to the final table.

The safest bet for 4A’s final four has been Portales, the only team to make every semifinal round in that time. They’re hoping to make it five, and also grab their second title in that span.

“We had a young team,” senior receiver Kellan Hightower said of last year’s squad, which rebounded from a 2-3 start to reach the semis, where it fell to eventual 4A champ Taos to finish 8-4. “I felt like we learned a lot so we can get back to where we were, and get to the state championship game.”

There are, naturally, questions on how safe of a bet Portales is after losing Julian Urioste to graduation. Urioste was the only 4A quarterback selected to the North-South All-Star Game last year, and provided much of the offense for the Rams during their late-season push.

The Rams now have junior Baylor Diaz at the helm, and plenty of offensive power to punish teams if they focus on Hightower, who led the Rams with 26 catches for 696 yards and seven scores.

“I feel like he’s going to come in and take charge, and we’re going to be good,” Hightower said of Diaz. “We have a great air attack and a great ground attack this year.”

Jalen Allen caught 24 passes for 471 yards and four scores last year, and both he and senior Jayden Killette have proven big targets for Diaz in the preseason.

The primary running back is senior Wromiah Gbassagee, who’s largely grabbed attention for his prowess at defensive end but has a lofty goal of 2,000 yards rushing — “I know it’s crazy,” he said — when he’s not punishing teams at defensive end.

In what’s best described as a “pick your poison” scenario, Gbassagee was usually the guy teams ran at last season, because the other defensive end was 6-foot-3, 253-pound Philip Blidi.

Gbassagee thinks the defense could be better than the 2018 team that had four shutouts and held three other teams to a touchdown or less.

“I feel like we’re going to do really well,” Gbassagee said. “We’ll dominate if we just do what we’re told. (Our coaches) really got us much farther along than last year. There’s no situation like, ‘Whose guy was that?’ We all know our responsibilities.”

“I like having those two bookends,” Portales coach Jaime Ramirez said of Gbassagee and Blidi, who has verbally committed to Texas Tech next season.

The schedule is difficult early, with a pair of Saturday road games, but it’s followed by a favorable nine weeks. The Rams are home for a month with three straight home games and a bye, followed by non-district tilts at Capital and Dexter in October. District play begins Oct. 18, with Ruidoso as one of two home games on the three-game 3/4-4A schedule.

Will that be enough to put Portales in prime position for another big postseason run?

For now, Ramirez is just playing one hand of cards — Saturday at Hope Christian.

Key guy on offense: Senior Kellan Hightower is the Rams’ top returning deep threat, but Jalen Allen has established himself as a tough cover as well.

Key guy on defense: Texas Tech commit Philip Blidi (DE) anchors what should be a stout defense, while Wromiah Gbassagee led the Rams in tackles and sacks last year.

Key game on schedule: The District 4-4A slate with Ruidoso at home Oct. 18, Moriarty on the road Oct. 25 and Lovington at home Nov. 1 to close out the regular season.