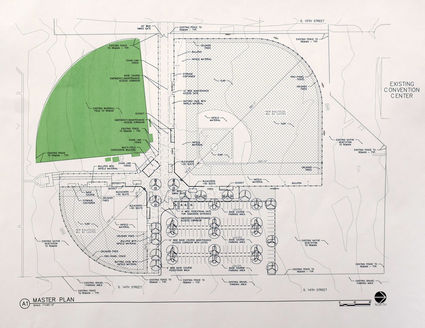 The school district would construct new baseball and softball fields, parking and a building that would host a kitchen and restrooms on the site.

School district superintendent Aaron McKinney and school board members met briefly with Tucumcari city commissioners in a public work session before the commission met in a regular meeting.

No action was taken on the matter, but all agreed discussions will continue.

The regular meeting was rescheduled from its regular Thursday date to assure enough commissioners would be available to take action.

Three fields adjacent to the property that would be granted to the school district, including the diamond used for high-school girls softball games, and Little League fields would remain as city property.

City manager Britt Lusk said the plan would allow the school district to build diamonds that meet requirements of the New Mexico School Activities Association, which sets standards for sports facilities in the state.

McKinney told the commission the diamonds could be used for community sports as well as high-school sports and would allow Tucumcari to host regional high-school tournaments in baseball and softball.

Lusk said that would benefit area restaurants and lodging facilities.

McKinney said Wednesday that arrangements for the project won't be finished in time to place the bond issue on the Nov. 5 election ballot. Instead, he said the district would hold a special election sometime in 2020. Bond elections aren't allowed onto the regular election cycle except in odd-numbered years, which would push it to 2021.

In its regular meeting Sept. 9, the commission:

• Approved a list of priority projects and a legislative funding request for the Tucumcari Senior Citizens Center. The priority list, submitted for the center's Infrastructure Capital Improvement Plan, includes floor and exterior door replacements during the 2021 fiscal year beginning July 1, 2020, valued at $10,000; a "hot shot" vehicle in two years for delivering hot meals, $60,000; a new, multi-purpose senior center valued at $2.5 million through 2025; transportation vehicles in fiscal 2024, valued at $190,000; and kitchen equipment replacement in fiscal 2025, valued at $25,000.

The senior center plans to seek $201,417 from the 2020 New Mexico Legislature, including $86,561 for transportation that includes assistance for senior passengers seeking medical treatment; assistance with household chores for seniors valued at $57,178, and housekeeping and homemaking services valued at $57,678. The commission also voted to allow the senior center to use Quay County government as its fiscal agent after the city's unfavorable financial report rating from the New Mexico state auditor last year. This year's audit report was favorable.

• Authorized the community development staff to seek a waiver of the city's $25,000 match for $475,000 grant from the New Mexico Department of Transportation for resurfacing Second Street from Railroad Avenue to Historic Route 66.

• Authorized Fire Chief Doug Hogan to use $750,000 in state fire funds to purchase a secondhand ladder truck to replace the current ladder truck that Hogan said is needing frequent repairs and "costing more than it's worth."

• Approved the lease of a stretcher system from Stryker, a Michigan medical equipment supplier, for the city emergency medical services' new ambulance for five years at $6,959.17 a year for a total of $34,795.84. The new ambulance, which the city received at no cost, will be used for patients on long-distance transfers, Hogan said.

• Authorized additional construction to connect a 12-inch water main to a 4-inch line as water system improvements and resurfacing continue on Rock Island Street. The added cost of $19,947.77 in Community Development Block Grant funds will not violate the terms of the grant, according to Sharayah Sisneros, a community development project manager.

• Approved an allocation for the Tucumcari Public Library of $19,499 in state general obligation bond funds. Librarian Linda Gonzales said the money would be used for "chairs, movies, signs and other things they're doing."

• Appointed District 5 Commissioner Todd Duplantis to the city's Lodger's Tax Advisory Board and District 4 commissioner Chris Arias to the library board.

• Approved a park use permit to the Greater Tucumcari Economic Development Corporation to host a Lunch at the Park event that was held Monday.

• Heard a presentation from Renee Hayoz updating the Quay County Health Council, and introducing Brenda Bishop as the health council's new coordinator. Hayoz said the council has leveraged $27 for every dollar received in tax money in services that include diabetic dietary education, the annual Fun Run in October, the Strong Seniors exercise program at Mesalands Community College and other health-related programs and events. Bishop retired Aug. 1 as the program director Quay County Cooperative Extension Service.

• Heard Daniel Zamora, president of the Tucumcari Disc Golf Club, give a progress report on the Robert Lumpkin Memorial Disc Golf Course at Five Mile Park. The course has hosted official tournaments and recently hosted a disc golf fundamentals class that drew children interested in the game, Zamora said. The area also has seen less trash-dumping and ill use because the course is active, he said.