Record broken at Wheels on Fire 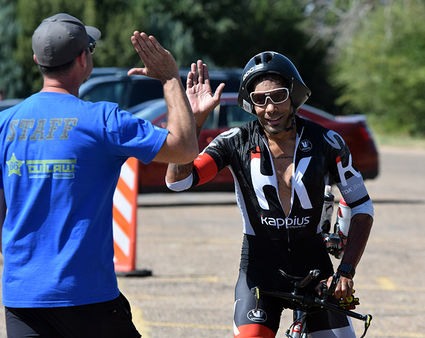 Jon Kulas of Santa Rosa broke the course record by nearly 25 minutes during the fourth annual Wheels on Fire 100 bicycle race Saturday, averaging nearly 25 mph over the 100-mile road loop in southern Quay County and a part of Curry County.

Perhaps the most impressive part was he did about one-third of the course by himself.

Most elite cyclists ride behind others to cut down on wind resistance and conserve energy. For the first 65 miles of the race, he did that with a cyclist from Colorado.

Then his riding buddy blew a tire. Some cyclists can change a flat in as quickly as a minute, but Kulas wasn't sure his riding partner could do it and didn't want to waste precious minutes on a changeover. He went the rest of the way alone.

"I could have waited, but I wanted to get that record," Kulas said.

"Thank you for not waiting," Wheels on Fire 100 organizer Brandon Goldston told Kulas after giving him a high-five.

Kulas, 49, finished the 100 miles at the Tucumcari Convention Center in 4 hours, 2 minutes and 49 seconds, giving him an average speed of 24.7 mph. The old record was 4:27. Kulas finished nearly eight minutes ahead of runner-up Joshua Barnett of Artesia.

It was the first time Kulas had competed in the Tucumcari race, though he trains regularly in Santa Rosa and once a week on Highway 104 north of Tucumcari when he's working at Sunrise Medical Group here.

"It was windy today, but not so bad," he said. "Living and training in Santa Rosa, I was in my element."

The men's and women's winners in the 50-mile race also broke course records. Craig Sweet of Hobbs finished in 2:13:33. Kristi Fury of Los Ranchos finished in 2:25:07.

A total of 117 cyclists registered, an increase of 10 from the previous year.

"We've grown each year, and it's a manageable growth," Goldston said. "If it grows too fast, you might lose some people because you don't do stuff as well."

The Wheels on Fire 100 takes a roughly circular route from the convention center east on Route 66 to San Jon, south up the caprock to Grady, west on Highway 209 to Ragland and north back to Tucumcari. Volunteers manned aid stations at several spots along the course.

Among the first-timers at the event were Ken and Celia Smith of Little Elm, Texas.

"We're highly impressed," Ken said. "It's a small ride where everybody knew each other and were really friendly. The course was great. The roads were smooth. I'd say we will do it again, definitely."