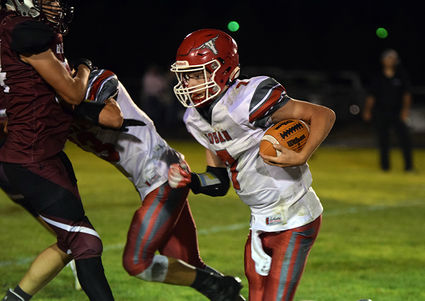 Logan quarterback Jantzen Paris looks for an opening while getting blocking help from a teammate during a game Friday at Melrose, ranked No. 1 in eight-man football in New Mexico.

MELROSE - In the first one-third of the game Friday night, Logan's defense had held Melrose, the state's top-ranked team in eight-man football, to one touchdown from scrimmage, stopped two drives in the red zone and forced a fumble.