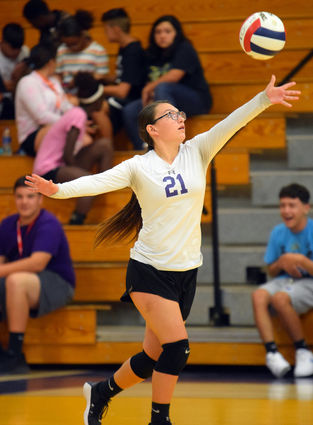 Tucumcari's Alexus Lafferty gets ready to serve against Raton during a Sept. 30 match at the Snake Pit.

"We started out a little sluggish," Tucumcari coach Dana Benavidez said. "We played better in the third and fourth sets but fell short in the fourth. Even though we lost, this will prepare us for district play."

Fort Sumner, which plays in the same rugged district as perennial state contenders Logan and Melrose, improved to 8-5.

The Lady Rattlers don't play again until they go on the road for an Oct. 15 match against Class 1A state-title contender Melrose, then begin their district schedule against Tularosa and Dexter after that.

Jones led Tucumcari with 10 kills and seven aces. The Lady Rattlers committed six serving errors during the match, but that proved to be a wash against the Tigers' seven errors from the serving line.

Benavidez said she was pleased her team continued to play well against a struggling foe.

"In the past, we've had hard time playing up to our level against teams that are weaker than us," she said. "But this year, I can safely think we'll keep playing at a high level and do what we need to do. We made so many hustle plays on the ball tonight."

Fort Sumner fell to 8-6 overall and 1-1 in district play.