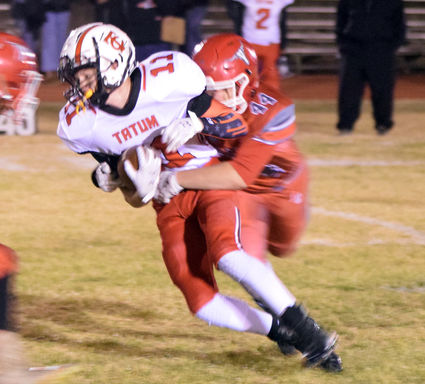 LOGAN - It appeared the Longhorns might be brewing an upset Friday night against top-seeded Tatum in the eight-man football semifinals, staking a 6-0 lead on quarterback Wyatt Wright's rushing and their defense stifling two Tatum drives.

But Tatum returned an interception for a touchdown late in the period. That proved to be a harbinger of Logan's five turnovers and an echo of its loss last month to the Coyotes. Tatum scored 40 unanswered points en route to a 46-12 victory Friday.

Tatum (10-1) will travel to No. 3-seed and district rival Melrose (10-1) in the championship Saturday. Melrose outlasted Menaul 62-40 in its semifinal.

Logan, a fifth seed, ended its season 6-5. The Longhorns lost its previous matchup against Tatum 50-0 on Oct. 18 as they suffered five turnovers in that game, as well.

Wright led the Longhorns with 127 yards rushing on 22 carries. He scored a touchdown and threw for another but threw three interceptions. Logan also lost two fumbles.

Logan coach Dwayne Roberts said he was pleased with his team's effort but frustrated that turnovers foiled his plans again.

"The first time we played them, it was the errors that hurt us," Roberts said. "We were expecting to be in the game, and a lot of people weren't counting on it being the type of game it was tonight. I think the final score doesn't indicate the kind of game it really was. The turnovers shifted the game out of reach."

Tatum coach Gary Richardson labeled it "an ugly win for us."

"It wasn't what we expected; it was slow going at the start for us," he said. "I have to give a lot of credit to Logan. They played a great game, had us scouted out well and played hard."

Tatum moved its first possession inside Logan's 15-yard line. After a short gain, the Coyotes lost yardage on a fumbled snap and lost 5 yards when Park Strong burst through the line to stuff a run. A fourth-down pass into the end zone fell incomplete.

"The defense played well for the most part," Roberts said. "Tatum earned everything they got."

Logan drew first blood when Wright tore off runs of 13, 38 and 16 yards on keeper plays, the last for a touchdown. His pass for a two-point conversion failed, but the Longhorns led 6-0 with 3:46 left in the quarter.

"In the last few weeks, we've been putting in some plays that really opened Wyatt up," Roberts said. "Nick Brown's a sensational runner, and Tatum started keying on him quick."

Logan's defense forced Tatum to punt on its next possession. The kick rolled dead on Logan's 2-yard line. After an incomplete pass and a short run, Wright tried to throw to his receiver on a short slant. Tatum safety Sebastian Jimenez read the play perfectly, picked off the pass and ran into the end zone for a pick-six. Scott Alexander scored on the two-point conversion for an 8-6 Tatum lead, one it never would relinquish.

Jimenez wound up having a big game. In addition to his crucial interception, he rushed for a team-high 63 yards in 16 carries and two touchdowns. He also went 5-for-13 passing for 110 yards and three more TDs.

Logan had another chance to score with a first down on Tatum's 8. The drive stalled after a sack, a short run, an incomplete pass and a Wright run being stopped at the 6 on fourth down.

With less than two minutes before halftime, Tatum's Jimenez completed a 37-yard pass to Kaden Rodriguez on third-and-long. Consecutive runs by Jimenez moved the Coyotes inside the 10. On fourth-and-goal, Jimenez scored on a 1-yard run and threw for a two-point conversion and a 16-6 lead.

In the second half, it was almost all Tatum, scoring three unanswered touchdowns for a 40-6 lead. Richardson said his team's big size tends to wear down opponents, and Logan was no different.

"We feel the second half or the fourth quarter is going to be ours because we just keep pounding on people," he said. "We've got a big line - we haven't always had that - and it makes a big difference for us."

Switching to a hurry-up offense, Logan's running game caught the Coyotes off-balance and drove the ball near the 10-yard line. On third-and-9, Wright found Julian Chavez for a 13-yard touchdown pass with 3:48 left.

Tatum answered back barely a minute later with a 59-yard touchdown pass to Rodriguez for the game's final margin.

Roberts, a first-year coach for the Longhorns, said he was looking forward to next season because he played only one senior Friday. He said Logan's football program also had lacked continuity with four coaches in four years, but he intends to change that.

"I plan on being here for a long time," he said. "We're going to make some noise next year, I guarantee you that."