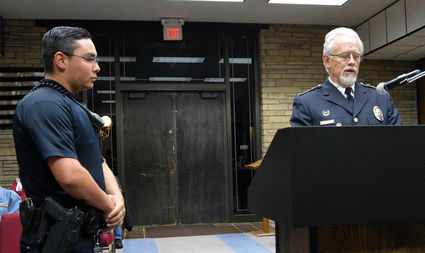 Tucumcari police officer Daniel Lopez listens as Police Chief David Lathrom tells the Tucumcari City Commission about Lopez's actions to prevent a suicide. Lopez's act earned him a Wreath of Valor award, the highest award the department can give.

Tucumcari police officer Daniel Lopez received a Wreath of Valor, the "highest award the department can give," Police Chief David Lathrom said Thursday for his actions in preventing a suicide Nov. 6 that involved a risk to Lopez's safety.

Lopez received the award at Thursday's regular meeting of the Tucumcari City Commission.

Lathrom said when Lopez arrived at the 11th Street bridge over Interstate 40 on about 5:30 p.m. Nov. 6, person stood at the railing and threatened to jump off the bridge.

"He managed to keep onlookers and friends of the subject at a proper distance while he talked to the subject," Lathrom said.

Lopez also managed to get close enough to the subject to pull the subject away from the railing.

"There was a struggle," Lathrom said, but Lopez pulled the subject out of danger.

"There was a risk that the subject could have pulled Officer Lopez over the rail with him," Lathrom said.

Also at Thursday's meeting, the commission authorized spending $60,565 in capital outlay funds to install a new floor at the Tucumcari Senior Citizens Center.

The commission voted unanimously to accept the capital outlay expenditure, which had been allocated by the 2019 New Mexico Legislature but granted Nov. 6 to the city through the New Mexico Aging and Long Term Services Bureau, according to Clara Rey, the senior center's director.

The commission on Thursday also:

• Approved a contract with Lamar Advertising for three billboards along Interstate 40 between Amarillo, Texas, and the New Mexico border. District 5 Commissioner Todd Duplantis proposed the city place additional billboards in Texas east of Amarillo. By the time westbound drivers reach Amarillo, he said, they already have made decisions about stopping for meals or to spend the night. Advertising would have more influence if drivers see it earlier, he said. The current billboards are placed at Arnot Road just west of Amarillo; further west at Wildorado, Texas, and at Adrian, about 17 miles from the New Mexico border.

• Decided Mayor Ruth Ann Litchfield, with city manager Britt Lusk as backup, would be the primary signer of documents related to the sale to the city of 318 acres of cropland from Jack Smith the city will irrigate with water reclaimed from the city's wastewater treatment plant. The purchase is part of a $5.5 million project that will bring the city into compliance with federal environmental regulations that prohibit the dumping of treated wastewater into streams.

• Approved consent-agenda items that include appointments of Cade Michaels, Josh Daniels and Clara Rey to the city's Community Development Board and Lori Mares to the Planning and Zoning board. Consent agenda items are approved by a single vote of the commission unless a commissioner asks that items be removed for further discussion and separate vote.

• Lusk said the city is preparing its Infrastructure Capital Improvement Plan, which forms the basis of requests for capital outlay funds for city projects from the 2020 New Mexico Legislature. The plan also is necessary to apply for state-funded grants in other areas.

He said he also attended a meeting Nov. 19 with New Mexico Game and Fish representatives to discuss ways to revitalize Tucumcari Lake, which could have "huge impact" on the city, county and eastern New Mexico.

Lusk also announced the city will receive a "hardship waiver" that exempts the city from paying a share of $500,000 in funding from the state transportation department for the resurfacing of Second Street from Railroad Avenue downtown.