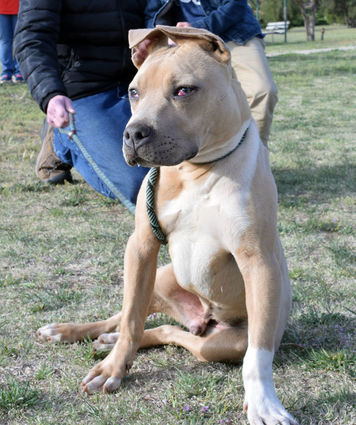 A pitbull puppy, named Phoenix by Paws and Claws Animal Rescue of Quay County, relaxes during a dog-walking event in Tucumcari's Dunn Park in April. Paws and Claws president Kathi McClelland said the dog's eyes still showed signs of abuse at the time weeks after police confiscated it from suspect Ralph Fletcher.

A Tucumcari man avoided a conviction on a felony animal-abuse charge after a Quay County jury deadlocked and failed to reach a verdict Wednesday during a trial in 10th District Court in Tucumcari.

The jury of nine women and three men deadlocked 9-...