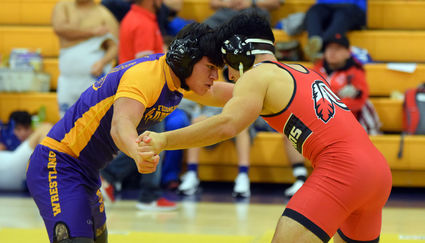 Tucumcari's wrestling team boasted a reserve champion and a fourth-place finisher Saturday during its perennially tough 13-team Rattler Invitational at the Snake Pit.

Dyson Clark, wrestling at 220 pounds for Tucumcari, fought his way back to a fourth-place finish after losing in the early rounds. Because he wrestled a mandated maximum of five matches Saturday, he lost by default for the third-place medal.

Rivero and Martinez spent much of their title match wrestling cautiously and watching for the other to make a mistake.

Martinez held a 1-0 lead after two periods, but Rivera scored a few points while countering Martinez's late bids for a takedown.

"Joe, you don't have to give much strategy to," Encinias said. "Joe is a complete wrestler. You give him a mat, and he ll be fine. My hat's off to Joe; he's going to battle to the very end."

Encinias expressed mild disappointment over losses suffered by Clark, Colt Garcia and Julian Vargas early in the tournament but noted it still is relatively early in the season. He expressed faith his team would be stronger when district matches roll around.

"We had some tough competition," he said. My kids, they scrap all the time, never quit. When we get around the corner and get where we should be, we ll be fine.

Tucumcari finished 11th in the tournament's team standings with 46 points.