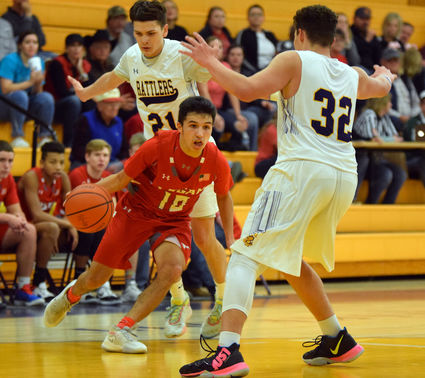 Logan's Dante Sanchez looks for an opening while being defended by Tucumcari's Jesus Ramos, left, and Andrew Henderson-Clark during a boys basketball game Saturday at Tucumcari's Snake Pit. Sanchez scored a game-high 31 points.

Logan erased a seven-point fourth-quarter deficit with an 18-2 run during its 70-60 boys basketball victory at Tucumcari's home opener Saturday.

Longhorns coach Kyle Griffiths blamed a lack of defense for his team falling behind and good defense for its big rally.

"We got some big defensive stops and picked up our intensity late," he said. "It all started on the defensive end, where we were able to get some easy buckets. Earlier, we got lazy defensively and let them get some easy shots."

Logan, ranked fourth in Class 1A by MaxPreps.com, improved to 8-4. Dante Sanchez, who buried seven 3-pointers, led the Longhorns with 31 points.

Tucumcari coach John Span wasn't crediting Logan entirely for his team's loss. He blamed turnovers, scoring droughts from missed opportunities and "not recognizing who the shooter is and leaving him wide-open for shots."

Sophomore Jesus Ramos led the Rattlers (3-8) with 23 points, but he committed several turnovers during the fourth quarter while trying to slash his way to the basket.

"That's a lack of discipline," Span said. "We need to share the ball when we break the defense down. We're doing too much individual stuff when we attack the gap; we need to kick it where we need to, but we're not doing it."

Span acknowledged his freshman and sophomore starting guards are inexperienced, but he wasn't allowing that as an excuse.

"When you're told to do it, you don't need any experience to do that," he said. "We'll have to get it figured out or else we'll have to try new people there."

After a closely matched first quarter, Logan stormed to a double-digit lead with a 9-0 run.

Tucumcari rallied with runs of 7-1 and 6-0 during the period to tie it before Sanchez buried a 3-pointer at the halftime buzzer for a 36-33 Logan lead.

Late in the third period, the Rattlers surged to a 51-46 advantage with a 3-pointer by Lujan, fastbreak buckets by Nathaniel Mardo and Robbie Hartmann and an inside shot by Ramos.

A 3-point shot by Mardo and two free throws by Lujan gave Tucumcari a 56-49 lead two minutes into the fourth period.

After a timeout, Logan responded with the 18-2 run. Sanchez scored seven points during the rally, and Jordan Evans added six. The only points the Rattlers scored amid that drought came from a 15-footer by Curtis Gonzales.

The Rattlers fell behind 11-1 to start their road game but rallied - especially during the fourth quarter - to win 56-50 Friday at East Mountain.

Tucumcari scored 27 points in the final period to turn around a 33-29 deficit. The Rattlers hit three 3-point shots and went 8-of-13 from the free-throw line during the final stanza.

"We struggled with making shots early," Span said, "but we were able to come together at the end and pull it out."

Ramos led Tucumcari with 21 points, scoring 15 in the decisive final period. Andrew Henderson-Clark added 16 points and Gonzales 14 for the Rattlers.

It was Tucumcari's first game without senior forward-guard TJ Lampkin, who abruptly quit the team in the middle of Tucumcari's overtime loss to Class 1A-ranked Elida before Christmas break.