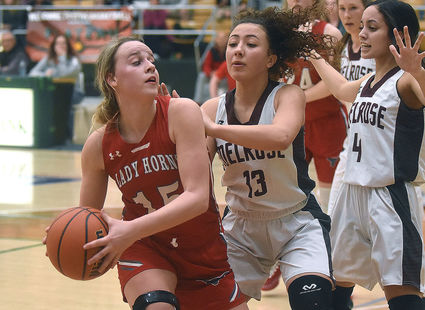 Logan's Karli Webb looks for a lane as she is defended by Melrose's Isabelle Sena in the second overtime of Saturday's Eastern Plains Athletic Conference title game at Greyhound Arena in Portales.

PORTALES - It was a matter of perspective.

For Melrose it was a lost opportunity, a title that slipped away.

Logan, down big for most of Saturday's game, rallied to force overtime, then forced another one, and won its first EPAC championship since 1976 by defeating the Lady Buffaloes 58-51 in double OT. Melrose, up big for most of the game, saw the Lady Longhorns surge back in the fourth quarter, surge ahead in the second overtime, and capture the title that just a half-hour or so earlier seemed would belong to the Lady Buffs.

"It was amazing," Logan head coach Glynna Strand said. "This has been our goal since (the current coaching staff has) been here, four years. ... We keep saying, 'We haven't done it, we haven't done it, we've gotta go get it. And we finally accomplished it."

"It's awesome," said Logan senior guard/forward Karli Webb, who scored a game-high 22 points, hit game-tying baskets near the end of regulation and the end of the first overtime, scored eight of the Lady Longhorns' 11 points across the two overtime periods, and had a block in the fourth quarter's final seconds to make overtime possible. "It's the first time (winning EPAC) in 44 years. We've been getting close the past couple of years, so finally to win it and accomplish it is just a dream."

A bad dream, perhaps, for Melrose.

"We had a lot of scenarios where we made bad decisions," Lady Buffaloes head coach Caleb King said. "We didn't do a good job of controlling the ball to win the game. And then in overtime we did the same thing - we missed a couple of block-outs that they turned into putbacks. It's just a learning experience for us."

From the time Melrose sophomore Johanna Roybal scored the game's first points by hitting a three until the waning seconds of the fourth quarter, the Lady Buffaloes had been ahead. They were up 15-6 after one quarter, 29-13 at halftime, and 39-26 after the third period.

It was 40-26 early in the fourth, after Melrose's Hailey Martin knocked down a free throw.

But, Kassi Foote's trey sent Logan marching along the comeback trail. Though Melrose still held a double-digit advantage, 42-31, with less than six minutes to go, Logan then outscored the Lady Buffaloes 16-5 during the fourth quarter's remainder. A Webb jumper, fast-break layups from Kyndall Ragland and Keilee Judd, and a Foote basket that got a friendly bounce, all amounted to Logan shaving the margin to 42-39.

It was again a three-point difference (44-41) after Melrose's Paityn Nicholson and Logan's Ragland exchanged baskets, and again (47-44) after Roybal and Foote exchanged treys.

A minute and a half remained at that point, and neither team scored again until 35.4 seconds were left, when Logan's Chesnee Day went 1-of-2 from the foul line to bring her team within 47-45.

A Foote steal on one end led to Kambry Burns drawing a shooting foul on the other as 19.1 seconds remained. Though neither of Burns' attempts would drop, Webb rebounded the second miss and put it back to tie the game with roughly 10 seconds to play in regulation. And Webb blocked an attempt by Melrose freshman Isabelle Sena as time was running out.

It took more than half the first overtime – two minutes and 20 seconds, to be exact – for either team to score, and the first OT points came on a Nicholson putback that gave the Lady Buffs a 49-47 lead.

A baseline one-hander by Webb tied it on Logan's ensuing possession, and Sena ended Melrose's next trip down the floor with a running baby hook that put her team ahead 51-49.

But an off-the-dribble jumper by Webb, again with roughly 10 seconds to go, tied the game at 51. Melrose couldn't score on the other end of the court, and Ragland grabbed the defensive board just before the buzzer, forcing a second overtime.

Logan never trailed in that period, outscoring the Lady Buffaloes 7-0. A spinning shot from Burns put the Lady Longhorns ahead for good, and was followed by a Webb turnaround basket, two Webb free throws, and a Foote foul shot.

It was fittingly Webb, after all her late-game heroics, who dribbled out the second-overtime clock.

And then it was official, an EPAC tournament championship hard-earned with a stunning rally.

"We just knew we could," Webb said. "We just kept fighting and had the confidence in our minds, and we just came out after halftime knowing that we could come back and win this."

"It was digging down and fighting with heart all the way," Strand said. "They never gave up, they just kept going after it, and they believed that they could come back and do it. And they did."

"Oh yeah," King said. "We'll face each other several times and probably see each other in states at some point. We'll just take what we learn each time and build on it, and hopefully the last game will be our best game."