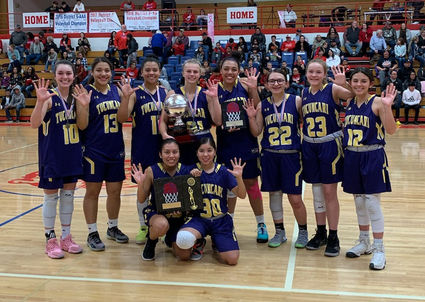 The Lady Rattlers (9-3) dominated the tournament, winning by an average margin of nearly 29 points per game while also vanquishing Santa Rosa 72-45 and Mountainair 58-36.

During the title game against Estancia, Jones scored 21 points to lead the Lady Rattlers, while Brown added 15 and Shipley 13.

Jones and Shipley each scored 19 points against Mountainair. Against Santa Rosa, Shipley scored 27 points and Jones 19.

Mathematically, the first-round game against Mountainair appeared to be the toughest matchup against Tucumcari. However, that was deceiving.

"Against Mountainair, we just came out flat," Hittson said. "And they had one little girl who was hitting (baskets) on anything she threw up. She probably could have thrown it behind her back, and it would have went in.

"Santa Rosa probably was the toughest team we played in the tournament."