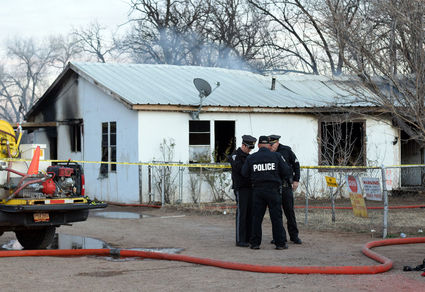 New Mexico State Police officers confer with each other Friday afternoon in front of a fire-gutted house in the 1900 block of South Rock Island Street in Tucumcari. The blazed killed two Tucumcari residents.

A house fire Friday afternoon apparently claimed the lives of a Tucumcari couple preparing to move to their son’s home in Clovis later this month.

Richard Urioste Sr., 75, and Ann Urioste, 74, were found dead in a blaze that gutted their home at...