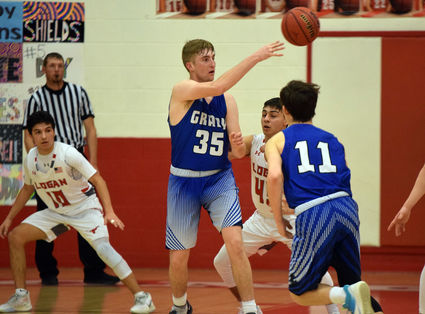 Grady/San Jon's Chisum Rush passes the ball to a teammate as Isaiah Mitchell (11) tries to set a screen during a district boys basketball game Thursday at Logan. Defending for the Longhorns are Dante Sanchez (10) and Nick Brown.

LOGAN - A key element in Logan's 63-60 district win Thursday over area rival Grady/San Jon was the Longhorns' star player was on the court in the final minutes of the game, and the Bronchos' star player wasn't.