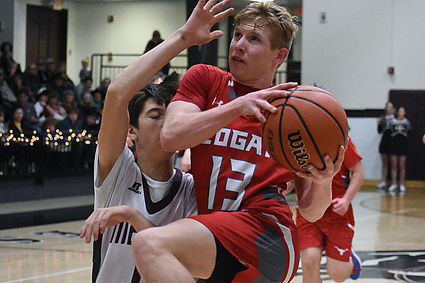 Logan guard Michael Sena goes up for a fast break layup in the fourth quarter of Thursday's District 6-1A game at Melrose.

MELROSE - Making the ordinary plays was what got the Melrose Buffaloes an early lead against Logan on Thursday night. Hot shooting and hustle for extraordinary plays turned it into a blowout.

Melrose led by double digits for the final 18 minutes and by as much as 34 in the second half, giving the family of Buffs coach Kevin Lackey plenty of time to fill his office with 200 balloons to celebrate that many wins over nine seasons with Dora and Melrose.

"That just means I've coached a bunch of great kids," he said, referring mostly to the Buffaloes he's coached to the last two 1A titles and possibly to the four of his own that laid waste to the balloon smorgasbord in his office.

With Melrose up 31-22, a long outlet pass sailed past the streaking Sterling Sena. He got to the ball at the last second and flipped a blind pass that found Tate Sorgen for basket and a Logan foul. He missed the ensuing free throw, but scored again on the offensive rebound before sealing the personal 7-0 run with a completed three-point play on the ensuing possession.

The Buffaloes closed the first half with Trace Jackson hitting a buzzer-beating trey from the edges of the center-court Melrose logo. When the teams returned, the 15-0 run concluded with Jackson and Dylan Valentine each hitting a pair of 3-pointers to make it 55-25.

"The difference between the third and first is we hit perimeter shots," Lackey said.

The only real solace for Logan (12-10, 2-3), led by Michael Sena's 16 points, was the players were still diving for loose balls while down 30 and rallied enough in the second half to prevent the running clock.

"We knew they were good shooters," Logan coach Kyle Griffiths said. "We defended them well in the first quarter, but once they get hot, there's not a lot you can do."

The Buffaloes hit nine threes on the night - Valentine five and Jackson four - to provide a complement to Sorgen's 23 on the interior.

Sorgen easily could have had a 30-point night, but frequently found his outside shooters and fellow big man Devon Bailey, who had eight.

"We work on that like crazy in practice," Lackey said. "Everybody dives and digs against our posts. We don't want them going 1-on-3, so they have to be able to pass it."

Valentine had 17 for the Buffaloes, while Jackson had 14.

Logan took a 32-20 lead by intermission and mostly made it stand up during a 73-64 district win Saturday over visiting Clovis Christian.

Dante Sanchez scored 26 points to lead the Longhorns, who improved to 13-10 overall and 3-3 in Class 1A's District 6. Wyatt Wright added 14 points and Garrett Bollinger 12 for Logan.

"It was a hard-fought win that we badly needed," Griffiths said. "The boys played hard."

Grady/San Jon had a double-digit lead in the first quarter and commanded a 45-27 advantage by intermission, despite two starters being out of the game.

"We did a great job of rebounding and were really able to attack their defense when they went to man(-to-man)," Bronchos coach Jonathan Langan said. "We seemed to bounce back well after our loss (against Fort Sumner) on Thursday."

Chisum Rush added 21 points and Chad Becerra 16 for the Bronchos, who improved to 10-9 overall.

The visiting Foxes took control early with a 26-11 first quarter en route to a 74-45 district victory Thursday over Grady/San Jon.

"We came out super flat and didn't play with much energy throughout the night," Langan said. "We did make a little run in the second quarter, but our deficit was too much to overcome."

Rush and Mitchell each scored 12 points to lead the Bronchos, who fell to 2-3 in district play.