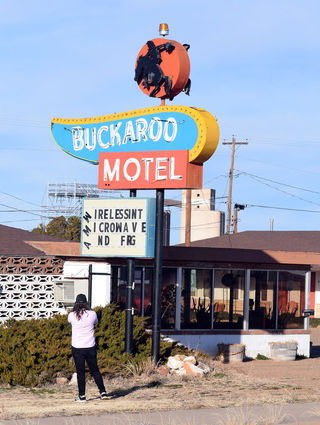 A tourist takes a photograph Saturday of the historic Buckaroo Motel sign on Route 66 on Tucumcari's west side.

Amid questions about its validity, the Tucumcari City Commission on Thursday passed by a 3-2 vote an ordinance designed to help the city keep historic neon signs in place.

The ordinance applies only to sign owners who volunteer to participate but imposes fines and possible jail time on those who do volunteer but later violate the ordinance's terms.

The commission added language to the ordinance that automatically allows a buyer of property containing a participating sign to opt out of the ordinance's terms.

Johnnie Meier, preservation officer for the New Mexico Route 66 Association, congratulated the commission for approving what likely is the first ordinance in the nation aimed at preserving historic signs.

The ordinance approved Thursday was revised from a version presented to the commission Dec. 5, which was rejected from even a first reading after Duplantis raised concerns about the ordinance's potential to interfere with private property rights.

Meier drafted a new version of the ordinance, which the commission approved Thursday.

The new ordinance was approved for publication and public hearing Jan. 9.

The new version changes the waiting period for purchase of a volunteered sign from 160 days to 90 days in response to property owners' concerns about the role of timing in real estate sales.

In that 90-day period, the ordinance allows the city to find an alternative, such as finding a better offer or buying the property itself, in an effort to keep the landmark sign within the city.

In a public hearing before the ordinance was approved, four speakers addressed the concerns of timing in a real estate transaction.

Lynn Hudson, an owner of Tucumcari's NAPA auto parts store, said, "Any sale of property is a time-sensitive event."

She added, "Anytime you include a third party, it complicates things."

She also said the ordinance is "not a reasonable thing to be doing" because it is subject to voluntary participation, and there are opt-out provisions.

David Brenner, owner of the Road Runner Lodge, suggested making an opt-out automatic when property is listed for sale.

Litchfield said that approach would open "loopholes" for a property owner to list a property, de-list it, then claim they have opted out.

Lila Doughty, manager of the Palomino Motel, said she would not volunteer the Palomino, adding any buyer who would buy a participating property would have to be made aware of the terms of the ordinance.

Moya said the notification would be in a property abstract.

Carmen Runyan, director of the Tucumcari Chamber of Commerce, said if she sold a classic car, she would not expect the owner to keep it in classic condition, and a building should be sold on the same terms.

Duplantis asked whether a city attorney had looked at the ordinance.

City manager Britt Lusk said he had and was advised: "Any time you enforce a historic property ordinance, there are problems with it."

Arias asked whether an already burdened city staff would have the time to seek other options during a 90-day waiting period and handle the resulting transactions.

The commission took a separate vote to add the language allowing an opt-out when a property is listed for sale, then voted on the ordinance as a whole.

In casting his "no" vote, Duplantis said, "I think the idea of the ordinance is good, but a lot of people are really concerned about it."