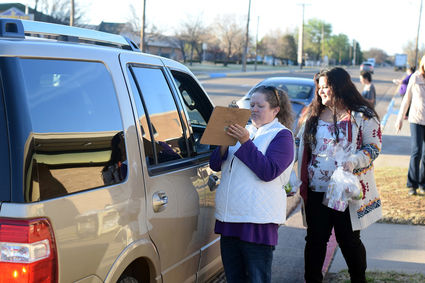 Charlene Montgomery takes down the name of a recipient as Audra Rivera, both with Mesalands Community College's social work program, prepares to hand over boxed breakfasts through the vehicle's window Monday morning at Mesa Cafeteria in Tucumcari. Workers and volunteers distributed about 200 breakfast bags for children in the wake of schools closing for three weeks because of the coronavirus pandemic.

The seemingly far-away coronavirus epidemic suddenly affected virtually all households in Quay County in recent days with closed schools, canceled or postponed events and, most recently, restrictions on bars and restaurants that may persist for several weeks.

Gov. Michelle Lujan Grisham last week declared a state of emergency, ordered the closing of all public schools through April 3, banned all public gatherings of more than 100 people, and the state's Department of Health ordered nursing homes to restrict visitors.

President Donald Trump soon followed by declaring a national state of emergency and imposed a travel ban of visitors from Europe, Ireland and the United Kingdom. Many Route 66 travelers who come through Tucumcari

On Sunday night, the Department of Health ordered restaurants and bars operate at no greater than 50% of maximum occupancy or 50% of seating capacity. In addition, tables and booths at these establishments may not seat more than six people, and all occupied tables and booths must be separated by at least six feet. Patrons may not be seated at bars, and standing customers will not be served.

At midday Monday, the City of Tucumcari stated on its Facebook account it is closing its library, recreation center, convention center and historical museum until further notice. City Hall's lobby also will be closed. It will take payments online, by phone or through its dropbox. The municipal court and Community Development office will remain open, though the latter will conduct business through its window only.

All the efforts aim to slow the spread of COVID-19, or coronavirus, that had infected more than 178,000 people worldwide and killed more than 7,000 as of midday Monday. In the United States, the total number of infections stood at more than 4,000 and rising, with nearly 70 deaths.

In New Mexico, the Department of Health began last week with zero cases but had reported 21 people testing positive for the disease by Monday. The cases were in Sandoval, Bernalillo, Santa Fe and Socorro counties. None had been reported so far in Quay County. Nearly 600 people in New Mexico have been tested.

During a news conference Friday, Lujan Grisham said the closing of all public schools might be extended past April 3 if conditions warrant it. Schools will not be required to make up the lost days.

"This is a proactive measure. New Mexico has no confirmed cases of COVID-19 in our schools, but closing schools proactively has been shown to be one of the most powerful non-pharmaceutical interventions we can employ," the governor said.

Lujan Grisham spoke of "flattening the curve," or slowing the spread of the disease so it doesn't overwhelm hospitals and other health-care systems like it has with Italy's. That European country has seen more than 27,000 cases and 2,100 deaths - a fatality rate of over 7%. Cases in Italy also have overflowed its intensive-care units.

Disease experts report COVID-19 is 10 times more lethal than typical seasonal influenza, mostly because it can cause severe pneumonia. The elderly and people with compromised immune systems are much more vulnerable. Almost no deaths in children have occurred from the virus.

The virus also has proven to be highly contagious - in part because infected people who show no symptoms may spread it for as long as three weeks.

Those who are sick should stay home and call (855) 600-3453 if they show COVID-19 symptoms of fever, coughing or breathing difficulties.

All Quay County public schools will remain closed through at least April 6.

The school will continue to provide meals to students during the closure. Breakfast will be from 7:30 to 9 a.m. and lunch from 11:30 a.m. to 1 p.m. at the Mesa Cafeteria.

"This is going to be more of a grab-and-go lunch," McKinney said. "It's going to be like a summer lunch program."

On Monday morning, cafeteria staff and volunteers had prepared about 400 breakfast boxes for students. Parents were allowed to drive their vehicles to the cafeteria's curb, where volunteers handed them the meals.

Parents can check the website newmexico.gov/education to find out more information about meal sites for children.

Games and practices of area schools' athletic programs were canceled. (See separate story on Page 1B.)

Access to Tucumcari's school-based health clinic will be moved to Sunrise Medical Group at 220 S. Third St. from March 23-27.

Tucumcari school grounds will undergo a deep cleaning and disinfecting.

McKinney said Tucumcari would not make up the lost days from the closure. Nor will San Jon or Logan.

He expressed optimism the extended break might not be too disruptive, as it coincides with a previously scheduled one-week spring break. Logan and San Jon also had spring breaks scheduled before the three-week closure.

Mesalands Community College continues to hold classes, but it noted on its Facebook account that "faculty will move courses online as quickly as possible." Several events this month involving the college's rodeo and golf teams were canceled.

The decision came shortly after the NCAA Tournament was canceled and the NBA, NHL, PGA and MLS seasons were suspended. Major League Baseball canceled spring training and has pushed back the opening date of its season at least two weeks.

On Sunday, the governor ordered all state agencies to increase remote-work and minimize face-to-face contact.

Visitors will be allowed inside after their temperature is taken; anyone with a fever of over 100 will be barred. Visitors must wash their hands or use sanitizer and be escorted by staff to and from the patient's room.

These are places or events that have changed operations or schedules because of the pandemic:

• Services at St. Anne's Catholic Church in Tucumcari and other Catholic churches in the county were cancelled until further notice on the order of Archbishop John C. Wester of the Archdiocese of Santa Fe. "We are particularly concerned about the safety and health of our elderly, children and our chronically ill population," he stated.

• The Tucumcari Senior Center and Logan Senior Center closed their meal-serving sites but will continue to deliver meals to those who qualify.

• The fifth annual Tucumcari Rawhide Days festival, scheduled for May 1-2, was postponed.

• The Quay County Friends of the NRA Banquet, scheduled for March 28 at the Tucumcari Convention Center, was postponed.

• A performance set for Tuesday at the Tucumcari High School auditorium by the Watoto Children's Choir of Uganda was canceled.

• The Tucumcari Columbus Club's concert of Str8 Shot on April 18 was postponed.

• The Odeon Theatre, the county's only movie venue, announced it would continue showing "I Still Believe" this week but will limit the total number of customers to 100 for each screening.

• New Mexico courts will remain open, though the New Mexico Law Offices of the Public Defender on Sunday asked the state's Supreme Court to postpone all trials and allow all but the most essential hearings to be held telephonically to limit the spread of the virus.