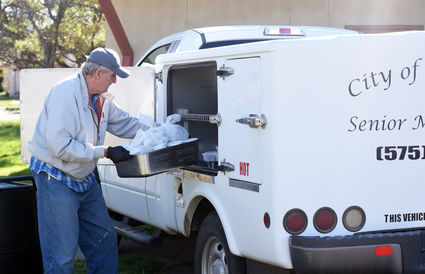 Al Johnson, a volunteer at the Tucumcari Senior Center, prepares to deliver lunches Wednesday. The number of meals delivered by the center doubled since the state imposed gathering restrictions in the wake of the coronavirus pandemic.

Gov. Michelle Lujan Grisham on Monday instructed New Mexicans to stay home if they didn't work in essential fields and dropped the maximum number of people in public gatherings from 10 to five in an effort to slow the coronavirus pandemic.

Lujan Grisham, citing her legal authority as governor, said she would suspend the operations of non-essential businesses effective Tuesday morning. The full list of essential businesses is at the state Department of Health's website at cv.nmhealth.org/travel-recommendations.

The ratcheting up of restrictions came on top of last week's edicts that included limiting restaurants to only take-out orders or deliveries and hotels restricted to 50% of capacity.

The restaurant and motel restrictions likely would prove consequential in Tucumcari, as the city typically hosts Interstate 40 travelers and Route 66 tourists. According to third-quarter data from New Mexico Workforce Connection, the county’s food service and accommodation industry employs 444 people, more than any other sector. Even a small economic slowdown would throw scores of people out of work.

The COVID-19 virus had infected more than 370,000 people worldwide as of midday Monday, with more than 15,000 deaths. In the United States, the pandemic had soared to more than 40,000 confirmed cases and nearly 500 deaths.

In New Mexico, the state’s Department of Health reported 83 confirmed cases of coronavirus but no deaths as of Monday. Many were concentrated in Bernalillo County. No cases had been reported in Quay County, with Presbyterian Healthcare Services spokeswoman Amanda Schoenberg noting Dan C. Trigg hospital has tested 16 patients with none positive as of Tuesday.

Health experts say COVID-19 is 10 times more lethal than seasonal flu, with the elderly and those with compromised immune systems the most vulnerable.

Mass gatherings in New Mexico last week were capped to 10 people. Shopping malls, health clubs and movie theaters also were directed to close. The Odeon Theatre, Quay County's only movie venue, had announced earlier last week it would close because of the pandemic.

Those orders remain in effect through April 10, though Lujan Grisham said it might be extended “as needed.” She said Monday there was a high possibility those closures would go past that date.

The Department of Health said authorities would ramp up surveillance of businesses to ensure compliance. Violators of the order could lose their licenses and face fines or jail time.

Most area restaurants quickly announced they would accept take-out orders or deliver meals after the ban on sit-down dining. Quay County’s government amassed a list of about 25 eateries that offered those services.

Yvette Peacock, co-owner of Del’s, one of Tucumcari’s oldest restaurants, said she had 12 of her 29 employees working during the first days of carryouts.

“Probably next week we’ll increase it,” she said Friday. “I expect to get all our people back to work next week.”

She said her business was down about 40% since the new restrictions.

Peacock also announced Del’s would set up a pop-up grocery this week. Senior citizens could shop for fresh produce, meat, dairy, frozen items, paper goods and cleaning items for three hours in the morning, then the rest of the public could shop there in the afternoon.

“It was a brainstorm of mine,” she said of the pop-up. “There were too many shortages of food everywhere. Maybe this will help out.”

Tammy Fang, owner of the Golden Dragon Chinese Restaurant in Tucumcari, said business was “so far, so good.” It has offered delivery for years, and she said it is keeping the same number of employees as before the restrictions.

Fang said praised a woman last week who purchased a gift card there.

“She didn’t want to eat anything,” Fang said. “She said, ‘I want to help. I want to keep you in business.’ That makes me so touched. She’s so nice.”

It wasn’t all good news. Warren Frost, co-owner of Annex Bar and Grill in Logan, said takeout orders were so slow, he decided to stop them and close the restaurant for now. He said the Logan Super Stop convenience store next door would continue to serve burgers, pizzas, chicken and burritos.

Frost said the Annex’s closing would affect about 15 employees, but “it’s my intention to pay them as long as I can” even if they’re not working.

Senior centers in Tucumcari and Logan also delivered meals to those who qualified.

The Logan center also saw a small uptick in the number of meal deliveries.

Convenience stores made adjustments. Circle K, Yesway and Allsups banned refillable cups or mugs and said they would do more wipedowns of counters and door handles.

The Tucumcari school district last week served 1,579 breakfasts and 2,448 lunches via its first week of curbside service from its Mesa Cafeteria. All schools in the state remain closed through at least April 3.

Ministry of Hope announced it no longer is accepting clothing donations but is asking people to call (575) 461-6299 to make arrangements to get food during its regular hours Tuesday and Thursday at its back door.

Lowe’s Market imposed limits on certain purchases last week after customers flooded Tucumcari’s only grocery and depleted its stock. Such panic buying was seen in other stores across the nation in the wake of pandemic restrictions.

The store also rejiggered its hours from 8 a.m. to 8 p.m. instead of the usual 7 a.m. to 9 p.m. so employees would have more time to restock.

“Everything’s backed up at the warehouse; things are slowly getting here,” she said. “As soon as we get it here, we’ll get it on the shelf.

“It was a little stressful, but we got through it,” she added. “We’ve been helping each other out, and now it’s starting to slow down a little bit. I think it will go back to normal.”

Tucumcari Mayor Ruth Ann Litchfield and others observed motels appeared to be busy over the weekend even with the state’s 50% occupancy limit.

David Brenner, co-owner of the Roadrunner Lodge Motel in Tucumcari and past chairman of the city’s Lodgers Tax Advisory Board, agreed the city’s motels were busy enough over the weekend that rooms became scarce amid the restrictions, but it reflects a short-term phenomenon — “snowbirds” returning to their northern and eastern homes early because of the pandemic.

Brenner expects a slowdown soon after foreign Route 66 tourists canceled their reservations through May because of the pandemic and President Donald Trump’s recently imposed ban of travelers from Europe, Ireland and the United Kingdom.

“It’s going to dry up pretty quickly,” he said. “The fact is, in April, not many people are going to be traveling. I’m expecting to be lucky to hit the 50% in April.”

Brenner said the state’s stated reason for occupancy cap was to keep rooms available for health-care workers. He said there might be a second reason.

“I suspect, if we suffer an outbreak in this area, there may be a need to convert some hotel facilities to temporary hospitals,” he said.

Brenner implemented a touchless check-in system in response to coronavirus fears. Customers can check in from their cars before arriving. Assigned rooms are sanitized and the key left inside. The lobby opens only in the mornings for one customer at a time. The use of sanitizing wipes is encouraged for the lobby’s coffee station and door handle. Upon leaving, they can discard the wipes in an outdoor trash bin.

He said the touchless system “probably won’t be long-term.”

“It does make it an impersonal process, so the personality has to show up during the phone calls,” he said.

The city of Tucumcari last week announced the closing of its lobby, convention center, library, recreation center and historical museum in response to the pandemic.

Litchfield said the city wants to minimize layoffs despite the closings.

“We’re trying to keep as many people on staff as we can,” she said, noting some have been reassigned to other duties.

St. Anne’s Catholic Church continued to cancel services, under the order of the archbishop. At least two other Tucumcari church streamed their services online Sunday for the benefit of those that couldn’t attend.

Litchfield said disconnections to city utilities would be postponed to April 21. She urged residents to make arrangements if such bills can’t be paid by that time.

Plateau Telecommunications stated it would not terminate customers’ voice or internet service because of inability to pay and would provide a 25% discount for those who can provide proof of hardship from the pandemic.

The U.S. Small Business Administration announced it is offering low-interest federal disaster loans for working capital to all New Mexico small businesses suffering economic injury as a result of the pandemic. The interest rate is 3.75% for small businesses for up to 30 years.

District Attorney Timothy Rose stated in a joint news release from three county sheriffs and the police chiefs of Logan and Tucumcari he would throw the book at criminals “taking advantage of others” during the pandemic.

“We will do everything in our power to ensure that you receive the maximum punishment allowed by law for any crimes you commit during this crisis,” it stated.

Other businesses and offices went to appointment-only openings. 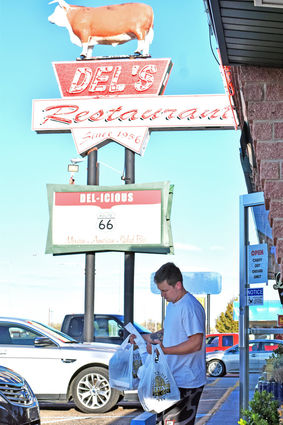 “But everybody’s pulling together and helping each other,” she said. “We’ll get through it. We just have to help each other. Please remember your neighbors, especially the elderly. f they need something at the grocery store and you’re able to, help them out.”