Mask use low in Tucumcari 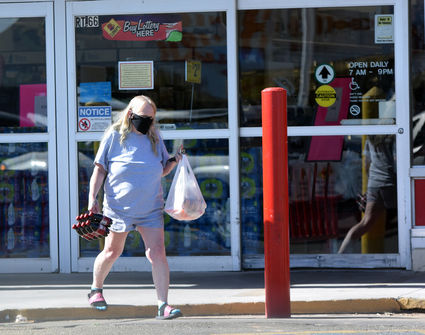 A woman wearing a protective mask exits the Lowe's Market in Tucumcari on Wednesday afternoon. The Quay County Sun observed less than one-fifth of customers at various Tucumcari stores wearing masks, despite recommendations by state and federal health officials to use them.

Less than one-fifth of customers at several businesses - including Tucumcari's only grocery - observed by the Quay County Sun last week wore protective masks to slow the spread of coronavirus, despite weeks-old recommendations from state and federal health officials to wear them.

Out of 15 employees seen at those stores, one was seen wearing a mask.

Tucumcari's mayor and an assistant manager at the grocery also expressed frustration last week at some residents for failing to consistently use social distancing or other measures to reduce the risk of the disease's spread.

During a vote last week by the Quay County Commission on a nonbinding resolution that urged Gov. Michelle Lujan Grisham to order the reopening of nonessential businesses if they followed COVID-19 safety protocol, District 1 commissioner Sue Dowell said, "I think Quay County citizens are smart enough and can follow rules in relation to that."

During a one-hour period Wednesday afternoon, a total of 122 customers were observed leaving Lowe's Market in Tucumcari. Twenty-two wore masks.

The count included 10 people who parked in handicapped spaces, a likely higher-risk group for the virus. Five wore masks, or half.

None of the nine employees seen in the store wore masks.

Similar customer numbers were observed at two other Tucumcari businesses. At the Tractor Supply Co., seven of 35 customers during a 30-minute period Thursday afternoon wore masks. At the Ace Hardware store Friday afternoon, two of 15 customers inside wore masks.

All employees at those stores were maskless but one - a greeter at Tractor Supply who also wore gloves.

The total number of customers from those stores was 174. Of that, 31 wore masks, less than 18% of the total.

When told about the observed numbers at the grocery during a phone interview Thursday, Dowell insisted residents were following COVID-19 safety recommendations but added: "Not everybody does the same thing. There are people who do the parts they're comfortable with."

Dowell acknowledged not wearing a mask at the grocery store some of the time but wore protective gloves at each outing there.

A few hours after her interview, Dowell posted on Facebook: "Quay County Residents: Please continue to do the good job you are doing with following precautions for the Covid 19 Virus. Help and support Quay County businesses and each other. No one has all the answers, but we will get through this and just wait until we see Quay County bounce back. If we have to go through all of this, there is no better place to be and no better people to be with than the citizens of Quay County."

New Mexico health officials recommended the use of masks in early April. The U.S. Centers for Disease Control and Prevention have recommended the use of cloth face coverings since mid-April. The CDC explained on its website that new data found a significant number of people with coronavirus lack symptoms and can transmit it others, hence the recent recommendation of wearing masks.

State and federal officials didn't urge their use earlier during the pandemic, which may account for some confusion on the issue.

During a health briefing Thursday, Lujan Grisham said she would continue to recommend masks but not require them because such a mandate would be "incredibly challenging." She also said people who need oxygen therapy can't wear them. She said she would "push hard" for employers to require masks for workers.

Dowell noted that lack of a mask mandate.

"Nothing is law," she said. "I still live in a country where I have choices. That doesn't mean you're going to see every citizen in Quay County wearing a mask. We have to be open to accepting and expanding our personal responsibility."

Nannette Macias-Ray, a nurse manager at the state Department of Health office in Tucumcari, during a telephone interview last week recommended wearing a mask in public and maintaining social distancing.

"It's going to prevent the spread; I wear one when I'm out," she said. "The aerosol of your saliva when you speak, you can't see it, but it's still there."

Tucumcari Mayor Ruth Ann Litchfield commented during a Greater Tucumcari Economic Development Corp. meeting earlier in the week that finding enough personal protective equipment for area employers would continue to be a challenge as the state's economy reopens gradually.

During the meeting and in a phone interview later in the week, Litchfield said she was concerned Quay County residents would catch the virus in Amarillo and bring back with them. The city of Amarillo's health department reported more than 900 active cases Sunday.

She said a friend recently went to Amarillo for a doctor's appointment. Everyone at the medical building wore masks and maintained strict social distancing, she said.

That changed when they went to a Sam's Club to buy gasoline.

Litchfield also said she has seen people in Tucumcari not adhering to social distancing.

"I think they think it's not necessary," she said with frustration in her voice. "I'm afraid we're in denial. I'm sorry, but I feel like we haven't hit a peak yet. Believe me, I'm ready for everyone to get back to work, too. But I still think we have to be careful. And people are not social distancing in the stores."

"I would disagree with the mayor lumping everyone into one bucket," she said. "I have seen many of our citizens doing many of the recommendations.

"I think there's no one answer to all of this," Dowell continued. "I think there are several things we can do along with social distancing. I think we're very wrong when we put people down for whichever safety measure make them feel comfortable."

Martinez admitted some customers get too close to each other when checkout lines grow long.

"We try to enforce it so they stand on those (social distancing) lines out there and not lingering at the registers when they're done," she said.

Martinez said employees have the option to put on PPE from the store's supply, but few wear them.

Mackenzie Goldman, a public relations specialist at Tractor Supply, stated in an email the company has educated its employees on social distancing and supplied them with PPE "to be used at their discretion."

She said the company's greeters also clean high-touch surfaces, and it has instituted other measures to lower the risk. Tractor Supply installed Plexiglas shields for cashiers, she said, as have many other businesses in the region.

A clerk at one of Tucumcari's hardware stores said he was unaware of any employee policy regarding masks.

A clerk at another hardware store said his stock of masks had been depleted a month ago, and it was difficult to get more.

A clerk at a third hardware store turned fatalist when asked about the pandemic.