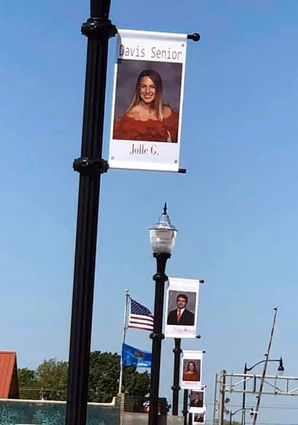 This is an example in Oklahoma of senior portraits on light poles that a Tucumcari woman is fundraising for so she can install them here.

A Tucumcari woman is raising money for banner portraits of the high school's 58 graduating seniors that will be installed the city's light poles.

Michelle Jaynes has been using local fundraising and a GoFundMe.com page at gofundme.com/f/class-of-2020-salute to collect money for the effort.

The estimated cost is $4,500 for the banners and bracket repairs or parts needed to install them. She said she's collected about $2,200 in pledges and about $850 in GoFundMe donations as of Monday morning. She said she has landed several local sponsorships, and several civic groups have offered assistance for the project.

The banners will be created by ArteFormz Custom Artwork and Design in Tucumcari and installed by city workers.

Jaynes said she wasn't sure where the banners would be placed but city officials are working on those details, including permitting. They likely would be erected on First Street and Tucumcari Boulevard.

Jaynes requests photographs of graduating seniors emailed to her by Sunday at [email protected] so the banners can be made. Her goal is to have them installed on the poles by late May or early June.

"It will take two to three weeks to get the banners in, and we want to leave the city employees time to put the banners up," she said during a telephone interview last week.

"I'm not out for any kind of recognition. I'm not in it for anything but to honor our seniors," she added.

Jaynes said she got the idea for the banners after reading a news report about a similar effort for seniors in a town in Oklahoma, though she doesn't remember where. She contacted the place that made those banners for details and took it from there.

She said she's committed to finishing the project.

"If we're still short of money in June, we can continue to fundraise until we get it all," Jaynes said. "We'd like to get the banners up as soon as possible; we're not going to cut off a fundraiser because we were $75 short and I'll have to start refunding money. My thought is we're going to get this project done, collect the money, and we'll be able to honor our seniors."

She said she was motivated to honor Tucumcari's seniors after the pandemic forced the cancellation of school and their spring events.

"Because of the lack of things the seniors are going to get to do, it's another way of honoring them when they're not able do them," she said. "Many things are still up in the air because of the coronavirus."

Graduation still has not been scheduled; officials are considering a virtual ceremony this summer out of concerns bans of public gatherings will continue.