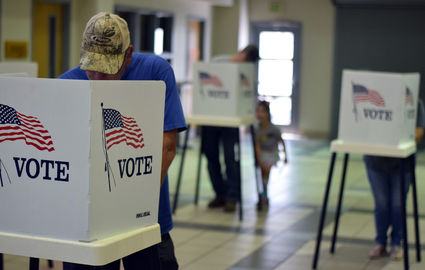 Voters fill out their ballots at polling booths Tuesday morning at the Tucumcari Convention Center.

Rush, 49, a rancher, farmer and substitute teacher in Forrest, defeated Todd Duplantis, 52, a business owner and Tucumcari city commissioner, by nearly a 2-to-1 margin in the Republican race for District 2 that encompasses the southwest part of the county.

Rush gained a total of 839 votes (65%) to Duplantis' 443 votes in unofficial results. Rush won every precinct.

Rush would replace current county commissioner Mike Cherry, who is term-limited, if an independent doesn't file for candidacy later this summer. The filing date for independents, minor party candidates and judge retentions is June 25.

No Democrat filed for that seat in the primary.

Duplantis didn't seem discouraged about the loss to Rush.

"I think she's going to do a wonderful job," he said inside the county courthouse minutes after the results were announced. "In the first interview we had, I said either one of us could be a win-win. I've long believed it's what the people want. If they feel she can do a good job, I support her."

Rush thanked the voters who cast ballots for her.

"I appreciate their support greatly," she said in the courthouse hallway minutes after the final results were compiled. "I did the best job I knew of running. I put out signs, I got on Facebook, I talked to people."

Lopez, 56, a farmer and business owner, won the Democratic nomination for the county's District 1 seat by nearly a 4-to-1 margin over Daniel Garcia, 78, a retiree.

Lopez would replace current county commissioner Sue Dowell, who also is term-limited, if an independent doesn't file for candidacy this summer.

No Republican filed for that seat in the primary.

"I'm looking forward to serving Quay County, and I'm anxious to get started," Lopez said during a brief telephone interview at his home shortly after results were announced.

"I congratulate him; he won," Garcia said in the courthouse shortly after results were announced. "That's who the voters wanted."

County Clerk Ellen White said only about a dozen provisional ballots were cast in the county, so the local results would stand.

White reported 2,214 of the county's 4,735 registered voters cast a vote in the primary, a turnout of over 46%. A check by her of other primary elections during the previous decade found no turnout above 39%.

White attributed the strong turnout to a record number of absentee ballots. She said more than 1,100 voters cast absentee ballots by mail, blowing past the previous county record of 90. More than half of those who cast ballots voted absentee during the primary.

County clerks in New Mexico encouraged voters to cast an absentee ballot in the safety of their homes because of the COVID-19 pandemic. The New Mexico Supreme Court several weeks ago rejected a petition from more than two dozen clerks hold a mail-in primary election, but the court ordered the Secretary of State to mail absentee-ballot applications to each registered voter.

White said many voters in the county were perplexed about whether in-person voting would occur June 2 and other issues regarding absentee ballots, including voters who had misplaced them after receiving them in the mail weeks ago. Others relinquished those ballots to the clerk's office so they could vote at polling places last week.

"That was a very confusing and chaotic for the voters," she said.

White said her office encountered no problems at in-person voting centers across the county, despite additional protocols to encourage social distancing and other safeguards for voters and election workers.

At the Tucumcari Convention Center on primary day, election workers sat behind large plastic shields to minimize potential exposure to the virus during voter check-in. X's were marked on the floor to indicate spaces for social distancing. Polling booths were spaced more than six feet apart. Disposable masks and hand sanitizer were offered at the entrance to voters. Pens were disposed in trash bags for recycling.

"COVID had absolutely no impact on my election at all," White said, "except for the work beforehand to get everything ready for COVID-safe practices. Our polling places were busy all day, without incident."

Final results in Quay County were known by 7:35 p.m. that day, a little more than a half-hour after polls closed.

White said rural counties would have fewer problems compiling results. The New Mexico Secretary of State's office announced Wednesday morning ballots still were being tallied in six counties, mostly in the Rio Grande Valley area, because of the high number of absentee votes. Most had been counted by Friday.

White reported Friday the total cost of the election in Quay County was more than $17,000, compared to the usual cost of $8,000 to $12,000. She submitted an invoice to the Secretary of State's office for reimbursement.

White attributed the higher costs to postage for absentee ballots and returns, additional staff for processing the absentee ballots, and the Plexiglas shields for election workers.