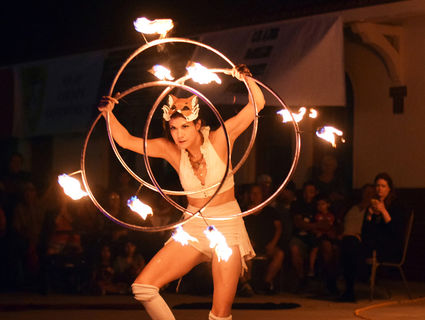 A performer with the Odd Lab group performs a routine with fire rings during a show at the 2019 Fired Up festival in downtown Tucumcari. This year's Fired Up was canceled because of COVID-19 restrictions - the fifth Tucumcari event to be canceled this year.

Tucumcari MainStreet announced Friday the cancellation of the 10th annual Fired Up festival set for Sept. 26 because of coronavirus concerns.

It was the fifth major Tucumcari event felled by the pandemic this year. Tucumcari Rawhide Days, Rockin' Route 66, New Mexico Music Showcase and the Rattler Reunion announced their cancellations weeks ago.

The Wheels on Fire 100 bicycle event based in Tucumcari, also set for Sept. 26 but not affiliated with Fired Up, remains on the schedule.

"Tucumcari MainStreet has made the difficult but necessary decision to cancel the annual Fired Up Festival that was scheduled for the last Saturday of September due to COVID-19 and the restrictions place on large events and gatherings," the organization stated.

"The health and well-being of festival attendees, entertainers, vendors and the Tucumcari community is our highest priority. While we are saddened to make this decision, we are already thinking of ways to make next year's event bigger and better."

The organization added: "As we move forward with planning future events, we will take into account all of the necessary changes needed to safely hold a large scale event."

Tucumcari MainStreet executive director Connie Loveland was out of town and couldn't be reached for comment. The organization's board secretary, Jessica Gonzales, said the board made its decision June 16 to cancel the festival because of ongoing COVID-19 restrictions.

State officials have said for weeks they had no timeline of when a ban on large gatherings would be lifted, except when a COVID-19 vaccine would be widely available. Health experts have said since the virus emerged in December 2019 they didn't anticipate a vaccine for 12 to 18 months.

"We didn't want to drag it out further," Gonzales said Monday. "We felt it was the right decision at this time."

The Fired Up festival had drawn record crowds in each of its last two years, including more than 4,200 in downtown Tucumcari in 2019.

The 2021 festival is scheduled for Sept. 25. Tucumcari MainStreet said any vendor who won't request a refund will have its fee rolled over to next year's event.

Brandon Goldston, organizer for Wheels on Fire 100, said Saturday he still was planning for his event and recently submitted his application for a New Mexico Department of Transportation permit to hold the race.

Goldston said Wheels on Fire 100 usually has the permit in hand well before this time, but NMDOT's offices were closed for several months because of COVID-19.

The Wheels on Fire 100 circuit starts and ends at the Tucumcari Convention Center and goes through San Jon, Grady and Ragland, including a challenging climb up the caprock south of San Jon.