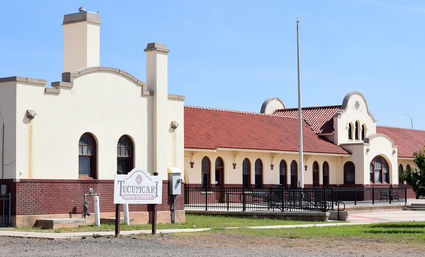 A Tucumcari MainStreet official revealed Monday during a Quay County Commission meeting the nonprofit organization is negotiating to acquire the Tucumcari Railroad Museum in as soon as 30 days.

Jessica Gonzales, a secretary for the Tucumcari MainStreet board of directors speaking on behalf of executive director Connie Loveland, officially was on the commission's agenda to request annual financial support for the organization and its Fired Up Festival, totaling $10,000.

With this year's Fired Up recently canceled before because of COVID-19 restrictions, Gonzales said the $5,000 for the festival instead would be used after it acquires the Tucumcari Railroad Museum partly to update its merchandise.

"I think it will be a relatively easy and seamless transition," Gonzales said about the pending acquisition. "We don't want to see the museum close."

Both the museum and MainStreet office are in the historic railroad depot, built in 1926.

Complaints about the lack of tourist-friendly hours long had dogged the museum. Gonzales mentioned Loveland, who has access to the museum through a door at her office, typically would let 10 to 30 tourists a week into the museum when no one else was there.

Gonzales said she hoped Tucumcari MainStreet would acquire the museum as soon as 30 days. At most, she anticipated the deal would be done by September.

The county commission unanimously approved its annual $5,000 donation to Tucumcari MainStreet organization and $5,000 to help its acquisition for the railroad museum.

• The commission approved an amendment from county emergency management coordinator Daniel Zamora of an intergovernmental grant agreement that would extend U.S. Census outreach efforts until Oct. 31 because of complications caused by the COVID-19 pandemic.

Commissioners and Zamora talked about problems county residents experienced in receiving census forms. Zamora said about one-third of residents had responded to the census, and 10% still hadn't received forms in the mail.

Zamora said the U.S. Census suspended distribution of packets several months ago during the early days of the pandemic and resumed those efforts only recently. He said census workers also would go door to door in the coming weeks to validate addresses even for residents who had submitted forms online.

Zamora said this was the first census to use internet filing. Combined with COVID-19, he said the U.S. Census was running behind in gathering data, and results probably wouldn't be available until early 2021.

Zamora acknowledged the census is a "big undertaking" but added: "I think they need to take a look at this and see what is happening."

Zamora said more local census outreach would include additional radio and newspaper advertisements and possibly a mobile informational kiosk. He said at a previous commission meeting each undercounted resident would cost the county about $4,000 a year.

• It approved an annual $2,000 donation to the Tucumcari Public Library that director Linda Gonzales said would be used for children's programs. Library board member Merlinda Turner asked whether it was possible to have the donation as a county line item so the library wouldn't have to request it each year. Primrose and other county commissioners said they preferred the library and other entities that receive county money explain how the funds would be spent and inform the public about their services and activities.

• Primrose said he was "pleasantly surprised" by the April report of gross-receipt taxes collected despite COVID-19 pandemic restrictions. He said that revenue fell only 3% compared to April 2019, which saw a 13% increase from April 2018 primarily because of the U.S. 54 bridge project near Logan. He said while lodging tax receipts had decreased sharply as expected in April, he saw an increase in food receipts - an indication residents were buying more from local grocers.

• The commission approved the donation of two acres from Evelyn Wallin to the Porter Fire Department and a thank-you note to her. The fire department had a 99-year lease with Wallin but couldn't complete a needed expansion of its firehouse without it owning the adjacent property.