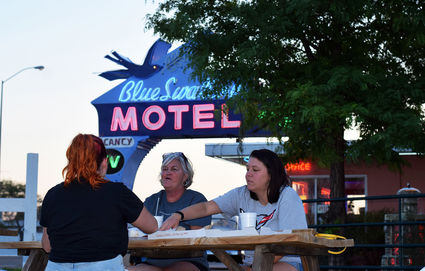 Tourists from Kentucky share a laugh Saturday evening in the picnic area of the Blue Swallow Motel in Tucumcari. The historic Route 66 motel is under contract with prospective new owners.

The caretakers of the Blue Swallow Motel in Tucumcari expressed optimism the historic Route 66 property would have new owners by the end of the June despite another offer falling through earlier this year.

Kevin and Nancy Mueller, Michigan natives who've owned the 1939 motel for nine years, announced on social media last week the property was under contact to an as-yet-unidentified couple.

"We're excited; they're going to be good," Nancy said of the prospective new owners. "Their backgrounds are going to serve them well here. I think we found the right people. They found us, actually."

Kevin said the new owners would tell their story "when the time is right" after the deal closes.

"I think they were at a point in their lives like we were when we first came here," he said. "They were looking for something different ... a change in life from the usual corporate world."

They said all parties involved in the pending sale agreed to announce it so Route 66 enthusiasts could bid goodbye to the Muellers and schedule a visit later this year to meet the new caretakers.

The Muellers originally put the property on the market in August 2018 for $1.2 million. It included two other lots, including charging stations for electric vehicles, and a classic Hudson car.

Kevin later revealed during an interview last week it was the second time the motel had been under contract this year.

"We had a contract in January with a closing date at the end of March," he said. "We extended it to the end of April, and on April 8 they backed out of fear of health concerns. They were at extreme risk (to COVID-19) because of pre-existing conditions."

The Muellers had closed the motel, anticipating the new owners would take over soon.

Kevin acknowledged the loss of the sale due to coronavirus was "an emotional roller coaster" that made them into "basket cases" for a while.

"You think you have it all figured out," Kevin said. "We were planning stuff for the summer. We were planning time with the grandkids. We were planning trips to visit people. All of a sudden, it goes away with this situation that nobody has any control over. A nuclear holocaust would have been easier to imagine that what has happened this year."

They considered boarding up the motel and reopening next year.

"We're glad we didn't because business has been really, really good," he said, despite occupancy restrictions imposed by the state during the pandemic.

Part of the motel's fame often is attributed to Lillian Redman, who owned it for more than 40 years. Her kindness to overnight travelers and her perseverance after Interstate 40 bypassed Tucumcari kept the motel going.

The Blue Swallow Motel was added to the National Register of Historic Places in 1993. Smithsonian Magazine years ago described it as "the last, best and friendliest of the old-time motels."

Dale and Hilda Bakke in 1998 bought the Blue Swallow Motel in Tucumcari from Gene Shelton, who owned the property for a short time after acquiring it from Redman. The Bakkes sold it seven years later to Bill Kinder and Terri Johnson, who ran it for five years before selling it to the Muellers.