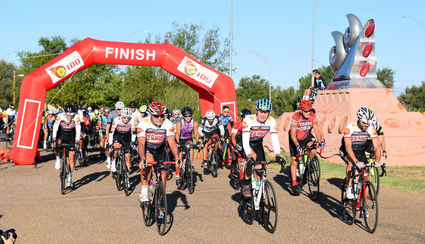 Nearly 120 cyclists start their trek at the 2019 Wheels on Fire 100 event at the Tucumcari Convention Center. This year's bicycle event set for September was canceled because of the ongoing coronavirus pandemic.

The Wheels on Fire 100 bicycle race scheduled for Sept. 26 effectively was canceled after the New Mexico Department of Transportation denied it an event permit last week.

"We cannot proceed with the 2020 Wheels on Fire event without this permit, no matter how much we want to!" he wrote.

He said those who registered for the race would receive refunds.

Goldston said in a phone interview Thursday that NMDOT sent an email informing him the application was rejected, citing the governor's ongoing ban on public gatherings because of the coronavirus pandemic.

"I was glad they gave us reason instead of a blanket decline," he said.

It was the sixth major Tucumcari event to be canceled by COVID-19 this year. The Fired Up festival, scheduled for the same weekend, was canceled the previous week. Other events canceled by the pandemic were Rattler Reunion, Tucumcari Rawhide Days, New Mexico Music Showcase and Rockin' Route 66.

The Wheels on Fire 100 had partnered with other bicycle races in Dumas and Plainview in the Texas Panhandle to share publicity and boost each other's attendance. Goldston said those events remained on the schedule.

Last year, Jon Kulas of Santa Rosa rode the 100-mile course in a record time of 4 hours, 2 minutes, 49 seconds, breaking the old mark by 25 minutes. Kulas averaged nearly 25 mph on the course that began and ended at the Tucumcari Convention Center and wound through San Jon, Grady and Ragland.

A total of 117 cyclists participated in the fourth annual event.

Wheels on Fire, a Tucumcari/Quay County Chamber of Commerce event, had received $3,700 in assistance from the city's Lodgers Tax Advisory Board.