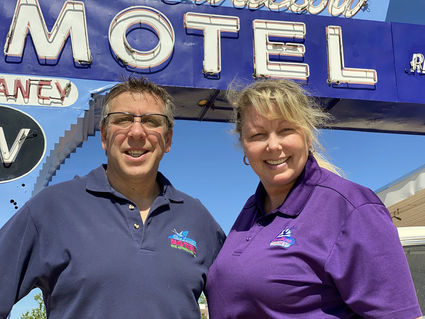 Robert and Dawn Federico pose in front of the Blue Swallow Motel sign in Tucumcari. The Federicos closed on their purchase of the historic Route 66 property on June 30 and will officially take over July 22.

The motel went under contract last month, and the deal closed June 30. The now-previous owners, Kevin and Nancy Mueller, had owned the property for nine years and put it on the market in August 2018.

The Muellers announced the new owners Friday in a social media post.

"Owning the Blue Swallow has been an amazing experience for the entire Mueller family, way beyond anything we imagined when we decided to buy this old motel," Kevin Mueller wrote Sunday in an email. :The relationships we've established, the skills we've learned, and the memories we've made will last us our lifetimes. This has been a true highpoint in our lives, and it is doubtful that anything else we experience can compare with our time spent here on Route 66."

The Federicos are traveling to introduce themselves to other business owners on Route 66. They officially take over the motel's keys July 22, and the Muellers will stay for a week or two to assist in the transition before departing.

Reached by phone Friday, Robert Federico said the seed of an idea to acquire the Blue Swallow Motel was planted during a road trip in December. Dawn long had been a fan of the Southwest, and she wanted him to experience it.

Driving west from Arizona, he said he was won over by the region before they reached Amarillo.

"I was allured," he said. "The Southwest was calling."

They stayed overnight in Tucumcari and began exploring its Route 66 sights. During a visit to the Motel Safari, he saw the Blue Swallow, which was closed for the winter season.

"Something called me to walk across the street, look at that beautiful neon and peruse the motel for about 45 minutes, taking pictures," he said. Robert said to his wife later: "That place is special. It seems like a very happy place."

They returned to their jobs in the Chicago area - he as a trade-show director and manager and she as a virtual assistant to several clients. When the COVID-19 pandemic hit in the early spring, it resulted in Robert having lots of extra time because he had been forced to cancel 25 trade events on three continents.

"It gave us the time to look around, do research and ask ourselves: 'What is the carrot at the end of the stick?"" he recalled.

They found out the Blue Swallow Motel was for sale. They listened to a podcast that included Kevin Mueller and his son, Cory. He said that "compelled" them to look seriously at making an offer, which surprised many acquaintances and family members. They quit their jobs and are embarking on "a new adventure," Robert said.

"We know Dawn and Rob thoughtfully considered their decision to buy the Blue Swallow and move from the hustle and bustle of suburban Chicago to the relative quiet of Eastern New Mexico," Mueller wrote. "We liked them from our first contact with them, and believe that they have the energy, passion, and enthusiasm to continue to maintain the Blue Swallow at a high level."

The motel went on the market nearly two years ago with an initial asking price of $1.2 million. Robert declined to say how much they paid, except to say: "We did what we needed to do to purchase the motel."

Robert said repeat customers shouldn't expect many changes, noting "Kevin and Nancy have an excellent model" for their business.

"We are humbled at the prospect alone of being able to be the caretakers of this establishment," he said. "While we may be officially the owners on paper, we're just caretakers at this moment in time. We expect the motel to be there long after we are not."