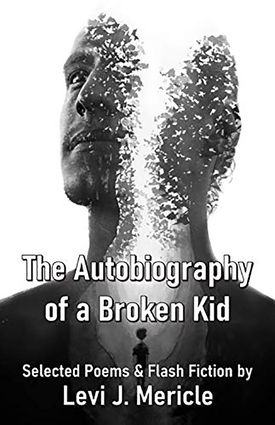 Though Tucumcari resident Levi Mericle had amassed hundreds of poems and short stories in 15 years of writing, he hadn't planned on self-publishing a book of his work.

He didn't need to. A publishing company in India liked what it read and offered do it for him. The result is Mericle's first book, "The Autobiography of a Broken Kid," published in late June by Cyberwit.net. It's a collection of selected poems and flash fiction, which are short stories of 400 up to 800 words.

Mericle also his known for his songwriting. He's earned two honors since 2018 from the International Songwriting Competition for "Whiskey Deep" and "All Mama Does Is Cry." He'd been a regular participant of reading his poetry during open-mic nights at the now-closed The Gallery Etc. in downtown Tucumcari.

Mericle, whose work has been published in at least 30 magazines or journals in several countries, said he submitted three poems to Taj Mahal Review about a year ago. The editor there contacted him and said the magazine would publish one of them. It wound up in the December issue.

"About a week or two later, they contacted me again and said asked whether I had a collection they could publish," Mericle said last week during a phone interview. "I was pretty blown away. I was thinking it was about time. But I wasn't expecting it to happen that way. Usually, you have to submit to book publishers. I wasn't expecting someone to contact me to offer to publish a book for me."

Karunesh Kumar Agarwal, managing editor of Cyberwit.net, stated in an email "we were impressed" with the "A Love Story" poem Mericle had submitted for Taj Mahal Review and offered him a book proposal.

"The most impressive quality of these poems is that the poet Levi is able to fill the reader's mind with illumination, which is the mark of genius and the guarantee of truth," he added. "The poet is quite impressive in blending together the opposite impulses of romantic spontaneity and classical lucidity."

Technically, "The Autobiography of a Broken Kid" isn't his first book. His work had been published in anthologies. But it is the first volume that's entirely his.

Mericle said the work he chose for "The Autobiography of a Broken Kid" goes back five, perhaps 10 years. It includes lyrics for several of his songs. He said he's been writing "seriously" since about age 18 but didn't begin submitting poems to magazines and journals until about four to five years ago.

As for the book's title, it comes from the title of one of the poems inside. The book isn't strictly autobiographical, he said.

"That (poem) essentially is about me, but the collection as a whole isn't about me," he said. "It's struggles I've gone through, but I talk about other people, as well."

Mericle said he owns plenty of poems or ideas for them if Cyberwit ever wants a second volume. He said he wasn't sure how many are in his shed, but he's guessing hundreds, perhaps thousands.

"I have boxes and buckets out in storage of poetry," he said. "If I have an idea - sometimes I don't finish it - I jot it down, and I never throw anything away. I may get more inspiration for that topic down the line."

Mericle is aware he could have self-published a book of his work but was reluctant to do so.

"I'm excited this is a traditional publisher," he said. "I don't like the idea of self-publishing just for the fact it seems like everybody can do it. Getting a contract and going through an actual publisher is something I've always wanted to do. Now, I've done it."

Mericle's "The Autobiography of a Broken Kid," a paperback volume, can be ordered through Amazon or Cyberwit.