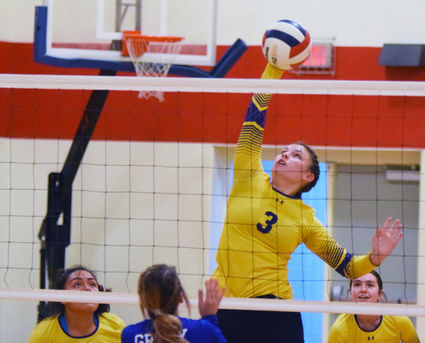 Tucumcari sophomore middle blocker Amber Owen rears back for a spike during a regular-season match last season. The Lady Rattlers are scheduled to begin their season in early October.

The New Mexico Activities Association on Wednesday released its radically altered sports calendar for the coming school year in response to the coronavirus pandemic.

As expected, almost all sports will have condensed seasons of 10 to 12 weeks each. Cross country and golf will begin their seasons first in mid-September, with volleyball starting in early October.

Tentative dates for the start of the official season and state championship events for each sport are listed below. The dates are subject to change because of the pandemic.

The NMAA stated it wanted to ensure all sports would be played while limiting overlap between each season so athletes still can participate in multiple sports.

NMAA Executive Director Sally Marquez in a videotaped interview acknowledged the new calendar was a "Plan B."

"And I guarantee we'll have a Plan C, D, E and F," she said, stressing the need for schools to be flexible. "It's not ideal, but it's workable."

As arduous as revamping the sports calendar was for the NMAA, athletic directors across the state face the hard part - making up their schools' schedules for the upcoming shortened seasons.

Tucumcari athletic director Wayne Ferguson said he hopes to have the entire Rattler sports schedules finished by the end of the week.

Ferguson, however, has spotted an issue he hopes the NMAA would address - conflicts between football, track and wrestling during the spring.

He said he also lost a football game against Robertson because it's in a five-team district, while Tucumcari is in a four-team league.

"District schedules are going to be a somewhat tricky situation," he said. "Not every school has the same number of district games, so it throws the schedules off a little bit."

Ferguson said the NMAA has forbidden overnight stays by teams to keep matchups more regional. As a result, he said he's received calls from Clovis inquiring about possible volleyball matches.

Regular-season tournaments also have been forbidden by the NMAA this year.

He said school districts that elected to use to virtual learning or a hybrid model during part of this school year still could have sports.

However, the possibility remains Gov. Michelle Lujan Grisham could order the entire state to go to virtual learning, effectively canceling sports at least part of the upcoming school year.

Marquez said workouts are forbidden for now with soccer, football, wrestling and basketball because they are deemed too high-contact.

All athletes also are required to work out with masks.

Marquez said the organization probably would require a reduction in the number of teams at cross-country meets to comply with the public gatherings ban.

Marquez said she was "hopeful" spectators eventually would be allowed during games this season but conceded the public gatherings ban could preclude them. She said she is encouraging athletic directors to use a ticketless admission system to reduce public contact and perform temperature checks on spectators as they enter a venue.

Marquez said she and other NMAA officials considered shifting baseball and softball to the fall but declined to do so because those sports were canceled last spring and still would be vulnerable to more cancellations in the fall.