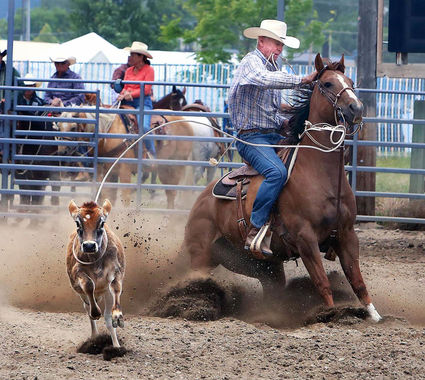 Jerry Koile competes in a roping event in a 2016 Senior Pro Rodeo event at the Ravalli County Fairgrounds in Hamilton, Montana. Koile this season won the men's all-round world title and tiedown roping title in the circuit's age-60 division.

Jerry Koile of rural Tucumcari is older than many of his fellow rodeo competitors, and he competes in only two events.

That didn't stop him from winning the all-around world title in the men's age 60-and-up division in the National Senior Pro Rodeo Association this year.

Though one rodeo event remained in a season shortened by the COVID-19 pandemic, Shannon Boyles of the NSPRA executive board confirmed during a phone interview Friday that Koile's circuit-leading 1,074 points for the all-around title was too much for the No. 2 competitor, Curt Johnson of Easton, Colorado, to overcome.

Koile piled up the all-around points this year despite being in fewer events.

"All the other guys are in four events. I'm the only guy who uses two events to get my points," Koile said. "That makes it a little more special, I guess."

In men's breakaway roping, Koile's 568 points was second only to the 622 points amassed by Butch Terrell of Wheatland, Wyoming.

Koile said he'll keep competing as long as he and his mount are able.

"I'll keep at it till he can't catch a calf or I can't get him saddled," he said.

Boyles said he'd be happy to have Koile for another go-round on the senior circuit.

"I've known him for several years," he said. "He supports the organization, and he's a great guy to be around. He's happy to be there, and I don't know if he's got an enemy in the world."

Koile began competing in rodeo again in 2009 after a 25-year break from the sport.