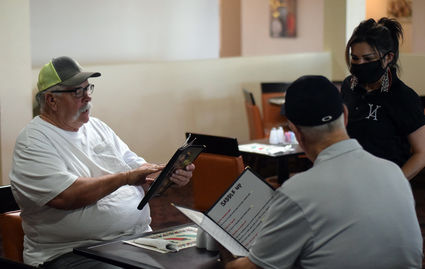 Vaquero Asador waitress Allison Montoya takes orders from Bucky Roux, left, and Arnett Hooser on Friday evening at the restaurant inside the Quality Inn hotel in Tucumcari. Roux and Hooser were the first customers of the restaurant's debut of serving dinners.

Vaquero Asador served its first dinner Friday night - a culmination of bringing back a restaurant at the Quality Inn hotel in Tucumcari after its predecessor, The Branding Iron, closed in January.

Todd Duplantis, who also owns Cornerstone First Edition and Kix on 66 restaurants in Tucumcari and serves as a city commissioner, acknowledged keeping a low profile for the restaurant for several weeks while gradually reopening it at the hotel at 3716 E. Tucumcari Blvd.

The restaurant's name translates to English as "cowboy steak," which reveals its theme as a cowboy steakhouse, Duplantis said Friday.

Duplantis said he became the hotel's caterer after The Branding Iron closed until COVID-19 restrictions at least temporarily shut that operation down.

He then opened a room-service food operation for not only the Quality Inn, but other motels along the east end of town and South Mountain Road. That opening proved to be a bit ill-timed when the governor lifted restrictions to allow restaurants to begin serving indoors at 25% capacity the same day.

Duplantis said he then approached the Quality Inn's manager and regional manager about reopening a restaurant there.

"They said they'd be more than happy to let me give it a shot," he said. "The Quality Inn has been very supportive, and I think this is going to be a good partnership."

He said Vaquero Asador began serving lunches a few weeks ago and breakfasts on the weekend as a way "to get our feet wet" before adding dinner services this past weekend.

Duplantis said it offers hand-cut steaks from Raider Red Meats in Lubbock. He said he also developed a new method to prepare Mexican dishes quickly without overcooking them.

Vaquero Asador offers a variety of half-pound burgers (including one made with alligator), appetizers, pasta and salads made with produce from La Casa Verde in Tucumcari.

Duplantis said he's submitted paperwork to the state so Vaquero Asador can reopen its bar for beer and wine sales within a few months.

He said the new venture employs about 15 people.

Duplantis acknowledged some similarities to the menu's design and food offerings from a previous venture, Mama T's Road to Ruin in Logan. He said he had an amicable parting from the Logan restaurant this summer with owners Bill and Tonya Cone. Duplantis said he had a walk-away clause with Mama T's and pitched in to help general manager Brian Cox open it in February.

The Quality Inn originally was built as a Holiday Inn in 1965, and it contained a restaurant then. She said the Branding Iron lost its full bar in 2010, but the restaurant kept evening meals seven days a week until it closed in January.

Duplantis said he's committed to this new venture. The Branding Iron sign that hung above the hotel's main entrance was scheduled to be replaced Sunday with a Vaquero Asador banner.

"We're hoping to make this an experience to come out," he said.