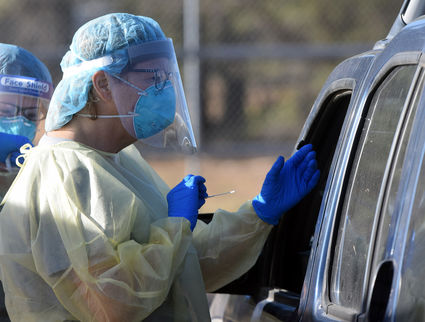 Deb Correnti, a Presbyterian Medical Services employee from Albuquerque, prepares to take a nose swab from a motorist during a drive-through COVID-19 screening Friday morning at the Quay County Family Health Center in Tucumcari. A total of 47 participated in the free screening.

The New Mexico Department of Health on Thursday reported six confirmed cases of coronavirus in Quay County the same day the state set a short-lived record high of 672 cases.

One day later, a new high of 819 cases was reported in New Mexico.

On Monday, one new case was reported in the county — a woman age 70 to 79 in the McAlester ZIP code.

Quay County remained in the green zone last week for school reopenings. However, seven cases in less than a week put the county in danger of falling into the yellow or red zone during the state’s next assessment Oct. 28. The county cannot remain in the green zone with more than nine cases over a two-week period or with a test-positivity rate of over 5%.

Gov. Michelle Lujan Grisham during a Zoom videoconference Thursday didn’t announce any new coronavirus restrictions other than the ones issued two days before, but she acknowledged she may if the situation doesn’t improve soon.

“This is the most serious emergency New Mexico has ever faced,” she said.

The 672 cases reported Thursday eclipsed a previous high of 573 on Wednesday. The previous record before that was 483 less than a week before, on Oct. 9.

The seven-day rolling average for cases rose from just over 100 just a few weeks ago to more than 500 by the weekend. Human Services Secretary David Scrase said cases are up in all regions of the state and all age groups.

Lujan Grisham said Thursday the number of hospitalizations from COVID-19 increased to 150, which was a 74% increase this month. Scrase said several Albuquerque hospitals “are getting quite full” and so are hospitals in southeast New Mexico. Texas also has halted non-critical transfers of New Mexico patients because their hospitals are filling.

The total number of hospitalizations in the state reached 183 by Monday.

The seven-day test-positivity rate, barely over 2% weeks ago, crept up to over 5%, above the gating criteria.

The number of COVID-19 rapid responses rose to more than 600 last week, a 60% increase from the previous week. Rapid responses at restaurants rose by 120% and retail and wholesale stores by 98%.

Lujan Grisham said the Department of Health would enforce with fines, if necessary, a mandatory quarantine for out-of-state visitors of 14 days or the duration of their stay.

“Those can be enough,” she said. “I believe this state can manage COVID in safe fashion.”

She said if the state’s caseload doesn’t improve, she said she would consider a reimposition of restrictions on restaurants, retails stores, businesses and nonprofit organizations.

“We have to be prepared to make tough decisions,” she said. “If we don’t see that turning around, I don’t see a choice.”

The number of cases was 577 on Saturday, 448 on Sunday and 518 on Monday, which was down from previous days but still elevated.

One death was reported Monday, bringing the statewide total to 935.

In Quay County, the total number of cases since the pandemic began rose to 87. Thursday’s six cases were the highest in one day since seven were recorded Aug. 20.

The totals in the county by ZIP code are 48 in Tucumcari, 33 in Logan, five in San Jon and one in McAlester. A total of 57 people have been deemed to have recovered from the virus. Two deaths have been reported in the county since the pandemic started.

East of Quay County, Amarillo reported a high of more than 3,700 active cases of COVID-19 as of Monday. Nearly 16% of the cases are hospitalized. The Amarillo region is at Level Red, the highest, which means local hospital capacity is stressed.

The DOH last week also confirmed the first influenza case in New Mexico — a teenager in the southeast. Scrase said the state’s rate of inoculations for the disease have fallen 13% behind last year’s pace after a promising start.

To find a source for a flu shot in your area, go to togethernm.org/flu.