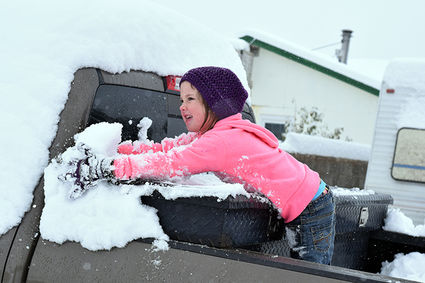 Kaelyn Stephenson, 6, brushes snow off the truck toolbox owned by her grandfather, Steve Stephenson, on Wednesday morning. Steve measured nine inches of snow that fell overnight at his Tucumcari home that morning.

An unusually potent storm nearly two months before the official start of winter dumped at least 10 inches of snow last week in Tucumcari and more in the region north of town.

Despite the biggest winter storm to hit in years, Interstate 40 stayed open the entire time snow fell Tuesday and Wednesday.

That doesn't mean travel difficulties didn't occur. Traffic on the interstate nearly dropped to a standstill at least twice Wednesday.

Daniel Zamora, Quay County's emergency management coordinator, partly attributed the slowdowns to road resurfacing projects on the highway in Quay and Guadalupe counties west of town in addition to the bad weather.

"It was because of construction and people losing it a little bit (on the roadway)," he said. "We didn't have any bad accidents, but we did have people sliding off the road and having the wrecker go out. It was hard for them to keep up with getting people back on the road."

According to records kept by the Tucumcari-Quay Regional Emergency Communications Center, it received six calls for accidents, five calls for motorist assists and nine calls for road hazards Tuesday and Wednesday.

Zamora said a power outage occurred Wednesday morning on Tucumcari's northeast side, but Xcel resolved that within a few hours.

The National Weather Service issued a blizzard warning Wednesday but canceled it a few hours later after high winds in the forecast didn't materialize.

He said he was surprised the storm didn't cause more disruptions.

"For nearly a foot of snow, I thought we did pretty good," Zamora said.

The storm closed all schools in the county from Tuesday through Thursday, though classes continued to be held online. Municipal and county offices also were closed Wednesday, disrupting early voting for the general election at the county clerk's office.

According to three trained spotters for the National Weather Service, the Tucumcari area received between 10.5 to 15 inches of snow.

Mosquero was hit hardest with 20 inches. Another spotter near Bell Ranch north of Tucumcari reported 19 inches.

During a county commission meeting last Monday, commissioners wondered how motels under state-mandated occupancy limits because of the coronavirus pandemic would serve travelers stranded by an I-40 closure.

Zamora said he and other county emergency managers passed along those concerns during a conference call later that day with the state's Homeland Security and Department of Health agencies.

On Monday evening, he said he received an email from the state's legal department.

"They said while there's no specific exemption with this type of situation, they would not expect motels to turn people away if they were stranded due to road closures," Zamora said. "They thanked us for bringing it up so they could dive a little deeper into those (issues) and maybe put something in there to account for that type of situation."

Zamora said he surmised that would be addressed during the next update of the public health order.

"I'd like to think so," he said. "This was an early winter storm, so I don't think this is the last of it. Hopefully, it's at least on their radar, and they're definitely thinking about it."

While motels wouldn't be expected to conform to COVID-19 rules during an interstate-closing snowstorm, any emergency shelter would. Those shelters would be expected to require social distancing and mask usage and supply hand sanitizer, he said.

"The idea is those shelters would be very last-resort," he said. "We would not want to open a congregant shelter if we can avoid it not just because of the public health order, but because of the risk involved with having that many people in one location. We're expected to follow the COVID-safe practices that are out there."