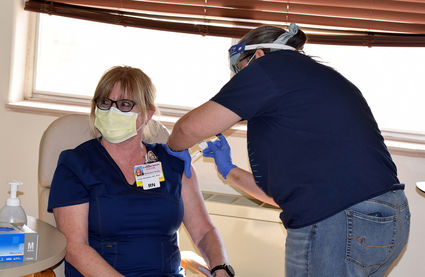 A long-awaited coronavirus vaccine arrived Friday in Quay County when about two dozen health workers at Trigg Memorial Hospital in Tucumcari were injected with the Pfizer version of it.

The first person at Trigg to receive the vaccine was registered nurse Sandi Missildine of Tucumcari, who provides care for COVID-19 patients at their homes. The first people in New Mexico to receive the Pfizer vaccine, which received emergency approval Dec. 11 from the U.S. Food and Drug Administration, are health workers at high or medium risk of contracting a virus that has killed more than 300,000 people in the U.S.

"I'm grateful to get it," Missildine said after receiving the inoculation Friday afternoon. "I think it's a good opportunity for us, and I feel like it's safe. It's really important for me to be safe because I'd hate for any of my patients to get ill."

Vickie Gutierrez, administrator and chief nurse executive at the hospital, said she was "pretty excited" about the historic day.

"This (pandemic) has gone on for a really long time, and we're excited to have a vaccine to give to our employees," she said.

Within minutes, Missildine and several other inoculated healthcare colleagues were escorted into another room at the hospital so they could be observed for 15 minutes for any possible side effects. Missildine said she felt fine after her observation time was up.

Gutierrez said Saturday through a spokeswoman that no serious adverse reactions were seen from Trigg employees who received the injection Friday.

"There were a couple of people who felt fatigue and one with a small rash at the injection site," stated Amanda Schoenberg, a spokeswoman for Presbyterian Health Services, which operates Trigg.

Gutierrez said about 25 Trigg employees were scheduled to get the Pfizer injection Friday and 15 more on Monday. All would get a required booster shot in three weeks.

Gutierrez said the hospital would receive a second allotment of the vaccine sometime after Christmas.

A hospital in Clayton earlier in the week discarded about 75 doses of the Pfizer vaccine after they had warmed to temperatures too high to be considered safe. The vaccine must be stored at supercold temperatures before being used. Gutierrez said Trigg's allotment arrived with no such problems.

New Mexico was scheduled last week to receive about 17,500 doses of the Pfizer vaccine for frontline medical workers. A second shipment was scheduled to arrive in the state this week.

The FDA also gave emergency approval Friday afternoon to the Moderna version of the vaccine. Gov. Michelle Lujan Grisham said during her weekly health briefing Thursday the Moderna vaccine would be given to residents and staff of nursing homes in New Mexico.

"This is the good news," Dr. Tracie Collins, secretary-designate of the state's Department of Health, said of the vaccines' arrival. "But we must hang on. We must maintain COVID-safe practices."

Collins said a webpage would go online this week that would track shipment, delivery and injection of COVID-19 vaccines.

Lujan Grisham said after a "vast majority" of healthcare workers are vaccinated, next on the priority list would be first responders, childcare workers, teachers, transportation workers, prisoners and essential workers, though not necessarily in that order. She said he was hopeful that could be accomplished by early spring.

She said the goal is to have at least 70% of New Mexicans vaccinated against the disease.

Human Services Secretary David Scrase said the vaccine was a crucial in combating the virus in New Mexico.

"The vaccine is our best shot of driving down case rates," he said.

Like the flu vaccine, Lujan Grisham said the COVID-19 vaccine wouldn't always prevent being infected by the virus, but the resulting antibodies produced by the shot would lessen the risk of severe illness and death.