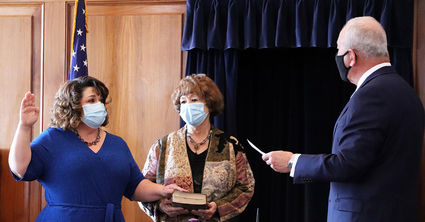 Administrative Office of the Courts

Chief Justice Michael Vigil administered the oath of office to her during a ceremony Jan. 25 in the Supreme Court courtroom in Santa Fe.

Family members of the justice were present for the ceremony. Other Supreme Court justices, friends and judicial colleagues attended remotely through an audio-video connection.

Democratic Gov. Michelle Lujan Grisham appointed Vargas to fill a vacancy created by the retirement of Justice Judith Nakamura, the only Republican on the high court.

After taking the oath, Vargas thanked her family and other judges.

Before joining the state's highest court, Vargas served on the state Court of Appeals. She was elected to the appellate judgeship in 2016 and previously spent 23 years in private practice.

Vargas received her law degree in 1993 from the University of New Mexico.