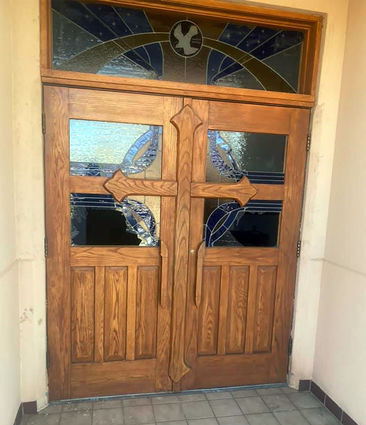 Someone broke the windows on the front doors of St. Anne's Catholic Church in Tucumcari on Saturday. The estimated damage was $600.

The front-door windows of St. Anne's Catholic Church in Tucumcari were vandalized a few hours before a service took place there Saturday evening.

According to a Tucumcari Police Department report, officer Justin Garcia was sent to the church at 306 W. High St. about 3:30 p.m. Saturday after parishioner reported the damage.

Edward Perea said someone had called him after seeing the damage, and he went there to find the front doors' stained-glass windows had been broken.

Garcia had Perea open the door to see whether any objects or anyone was inside the church. None was found.

The total value of the damage was estimated at $600.

The officer said he would request more patrols in the area. Perea said no video cameras had been set up, though the church was trying to acquire some.

No arrests have been made.

The church posted a statement Sunday morning on its Facebook page: "Our church was vandalized yesterday evening. While we are hurt and angry by this persons action, we will pray that they find peace. We ask that when you drive by our parishes please be vigilant and check the buildings, let's work together to keep our beautiful churches safe."