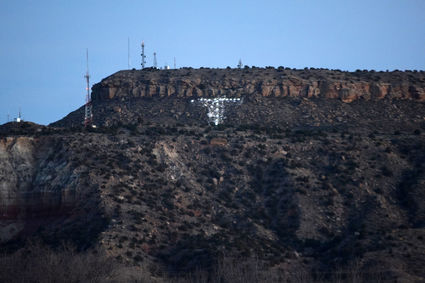 The lighted "T" on Tucumcari Mountain begins to glow in the encroaching darkness. A recommendation from the city's Lodgers Tax Advisory Board to spend $5,000 in motel tax funds to expand the lights to spell out "Tucumcari" on the mesa's north face appeared to be dead because of its unpopularity.

Members of the Tucumcari Lodgers Tax Advisory Board conceded Wednesday the ambitious proposal to spell "Tucumcari" in lights across the face of Tucumcari Mountain was dead, in spite of the plan having not been officially presented to the city comm...