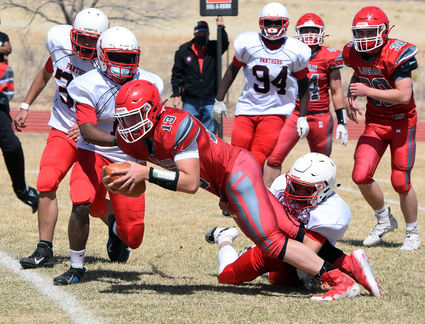 Logan quarterback Wyatt Wright dives into the end zone during a 4-yard touchdown run in the first quarter Saturday afternoon at Logan. Wright accounted for six touchdowns - five of them passing - during a 42-0 win over Menaul.

LOGAN - The Longhorns showed what they could do when two of their skill players aren't injured.

Logan quarterback Wyatt Wright, sidelined for a game after a concussion during a season-opening loss to Melrose, went 8-of-12 passing for 134 yards and...