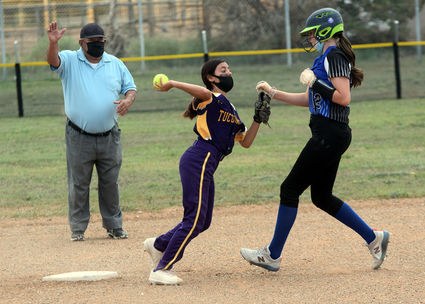 Tucumcari second baseman Harley McKinney throws to first after getting a force out against an East Mountain base runner during the first game of a district doubleheader June 1.

One East Mountain player in particular made life difficult for the Tucumcari softball team during its district-opening doubleheader last week.

Fireballing sophomore pitcher Olivia Ford threw a no-hitter and hit a three-run home run during the Timberwolves' 16-0 victory, then blasted two more three-run homers during her team's 24-5 victory in the nightcap.

Ford nearly hit a third homer during the second game, but Tucumcari left fielder Felicity Lopez caught it against the fence, then tumbled over it.

Ford totaled four hits and 13 RBI during the doubleheader. After the June 1 twinbill, she was hitting .725 with 44 RBI in just 12 games.

"I think the pitcher in Robertson is a step ahead, simply because of placement. She's got three to five pitches where they're supposed to go," Tucumcari coach CJ Oglesby said. "But with (Ford's) heat, if she had a big-time changeup or something else in her arsenal, you're talking about a college player right there, throwing heat like that."

Oglesby was much less equivocal about Ford's hitting: "She's a monster, man. Wow. She got in the batter's box with total confidence."

East Mountain improved to 9-2-1 overall after its District 4/5 opener. Oglesby noted the Timberwolves were 6-20 just two years ago, giving him hope for similar rapid improvement for his young and inexperienced Lady Rattlers squad (2-6).

"The improvement of that team is just unreal," he said of East Mountain. "There's a lot of them who couldn't even throw the ball."

In the opening game, Ford struck out 11 and walked none in just four innings. The only Tucumcari player to reach base was Izabela Reid, who was hit by a pitch in the second.

In the second game, Tucumcari briefly took a 1-0 in the second inning when Harley McKinney tripled and scored on Iliana Reid's single.

Tucumcari scored two runs in the fourth after Amaya Infante and Alexis Ramirez both singled. Sage Knapp drove one runner home on a double, and Ramirez scored on a wild pitch.

The Lady Rattlers added two in the fifth on Infante's RBI single and Knapp's ground-rule double that drove in one run. McKinney and Iliana Reid set the table with a single and fielder's choice, respectively.

The second game didn't become lopsided until the Timberwolves scored 10 runs in the final inning.

Oglesby in particular praised McKinney, a freshman second baseman who handled 12 chances and was involved in two double plays during the doubleheader.

"She's young, and she worries a lot about about the people outside the fence," he said. "She was really zoned in all day today, and she hit well in the batting cage all week. She's a good second baseman, and she's got a lot of talent in her family. I just told her to play to her ability. And she did today, and I'm really happy with her."

Oglesby said the continued improvement of his team makes it a pleasure for him to come to practices.

"It's crazy the way we're getting better," he said. "It excites me when I come to coach them every day, be around them. We're starting to hit the ball because we're in the (batting) cage a lot more. There was a lot more confidence today. I'm happy to be a part of it and see them grow."

The Lady Rattlers suffered another district loss Thursday with a 19-0 shutout against Dexter in the visiting team's district opener.

Oglesby said it "definitely wasn't a game to watch."