Resident given credit for time served in chase 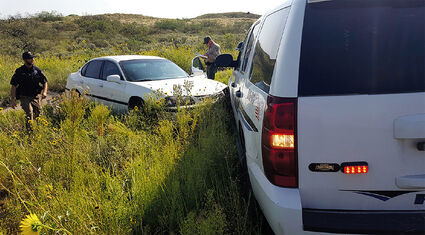 Logan Police officer Clay Osborn, left, and Quay County Sheriff Russell Shafer survey damage to a Logan Police Department vehicle after a 30-mile pursuit from Logan to Tucumcari in September 2017. One of the defendants in the case, Justin French, had his prison sentence reduced by an appeals court last week.

A Tucumcari resident who led Logan police and Quay County sheriff's deputies on a high-speed chase in 2017 will leave prison earlier than anticipated after an appellate court last week ruled he should have been given credit for time served in the...