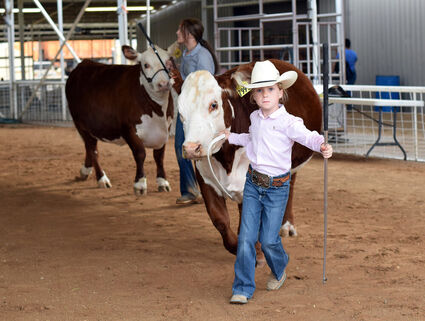 Libby Perez, 8, escorts her Hereford heifer out of the show ring during Friday's heifer show at the Quay County Fair. Perez's animal later was named grand champion. The fair allowed 6-, 7- and 8-year-olds to compete in the livestock shows for the first time.

The Quay County Fair embraced a youth movement, mostly out of necessity.

Earlier this year, the Quay County Fair Board voted to allow 6-, 7- and 8-year-olds to compete in the livestock show and sell their animals at the Junior Livestock Auction. The previous minimum age was 9.

Officials acknowledged they took the action so younger exhibitors would boost the overall numbers at the fair, which had been falling in recent years.

Shortly after recognizing eight high-school seniors who would age out of the event, fair board Vice President Justin Knight said during the Junior Livestock Auction the number of exhibitors was "down some" due to such graduations.

He urged audience members to "go out and recruit those kids and build up the fair to what it used to be."

The Junior Livestock Show proved indicative of the drop in participation. A total of 33 animals were sold at the Saturday night event, compared to 46 in 2020. Previous recent editions of the fair saw more than 50 animals on the block.

"We've got to get more young kids here," he said. "Hopefully, our numbers will be higher next year."

One of the new young exhibitors was Liam Kandel, 7, who participated in the goat show on Friday.

Liam and his father, Bobby, said the boy's uncle wanted him to take his show goats to the fair, but Liam long had been motivated to be there.

"He's been trying since he was 2," Bobby said. "It was his uncle's initial thought, but it definitely was his idea."

Though Liam admitted to a bit of nervousness while competing against other goat owners in front of a judge, he looked confident and under control with his animal in the show ring.

Before the fair, he said he trained and walked with the goat regularly. Liam said his goal with the animal during the show was to "make him sit up right and trying to look at the judge."

"I saw only one thing he forgot. He was holding it up the whole time; you're supposed to let it relax," Bobby said.

"For never having shown before - and I never was raised around this stuff - it was pretty surprising, to say the least. I'm extremely proud," he added.

Liam wasn't the only young exhibitor who looked assured.

"We had a 6-year-old girl with a hog three times bigger than she was, and she was handling it great," said fair board member Heidi Adams.

Liam later sold the goat, which finished second in its class, at the Junior Livestock Auction for $3,000.

The brother and sister took turns answering a question about their goals while showing their cattle.

"Keep your eye on the judge. Set the feet up right," Libby said.

"Make sure you hold the head up," Peyton said.

"Walk them a lot ... comb them and blow them, wash them every day," Libby added.

"Walking them into it so you don't have to use the show stick," Peyton said.

Their mother, Tonya, said "the 4-H and the fair is a good opportunity for the kids to learn to work." Though they didn't participate in the livestock sale because they are bred heifers that will eventually will add to the ranch's herd, Tonya said the auction also helps many participants bolster their college funds.

Libby also earned a big prize at the fair - her heifer earned a grand-champion ribbon.

Livestock champions of the fair:

Though the number of animals entered in the Junior Livestock Auction was down, bidding was robust. Sales totaled more than $127,000, more than $20,000 higher from the previous year.

Knight said he was grateful for the strong bidding in spite of the toll of the COVID-19 pandemic, which caused the fair to not have a carnival for a second straight year.

"It shows the heart of our community and our county," he said. "After the last 18 months or so, they've done a tremendous job to come out and support the kids."

Kindal Smith's second-place steer was the top animal at the auction, going for $10,500, bought by a consortium of buyers who pool their resources.