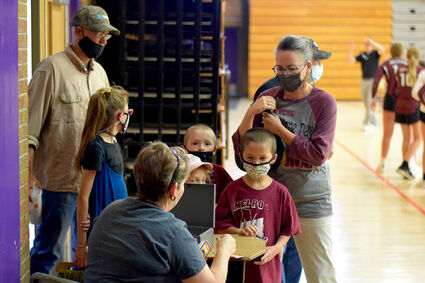 A masked family from Melrose pays admission Thursday for the season-opening Tucumcari-Melrose volleyball game at the Snake Pit. New Mexico's governor last week reimposed a mask mandate for all indoor settings in the wake of a steep rise in coronavirus cases.

Gov. Michelle Lujan Grisham last week reimposed an indoor mask mandate in New Mexico, and one key motivation for that move was made clear during a videoconference meeting one day later with school and state officials - to keep public schools open for in-person classes.

The governor also announced during a briefing Aug. 17 the state was requiring vaccinations or weekly negative COVID-19 tests for all workers in hospitals, congregate care facilities, schools and state prisons.

The order, which went into effect Friday, came as the state and nation saw a steep surge of new COVID-19 cases, hospitalizations and deaths - mostly with the virus' more contagious Delta variant afflicting unvaccinated people. Lujan Grisham said masks and vaccinations would help blunt the spread of the disease.

If outbreaks occur in schools, Education Secretary-designate Kurt Steinhaus said the PED and affected districts would "work together" to find ways to mitigate the problem. He said he was committed to not closing schools.

Gregory Frostad said the PED was updating its COVID Toolkit for schools, but the agency was "moving away" from remote instruction during coronavirus outbreaks at districts and "wants to keep schools open." Instead of closing schools during local outbreaks, he said the PED would consider other options, including more cohorting of students or temporarily barring spectators from sports events.

On Thursday, the PED stated in a news release it no longer would close any school if it experienced four COVID-19 rapid responses in a 14-day period.

The PED stated it is evaluating updated guidance and processes with the state's medical advisory team "with the goal of ensuring students and school staff are safe and that schools can remain open."

"Our medical advisers have noted that schools currently are not hotbeds of COVID-19 infections," Steinhaus stated in the release. "At this point, we are not closing schools. The caveat is that the virus could change things, but we need to do what's best for kids, which is to keep in-person learning to the extent possible."

Outdoing Education Secretary Ryan Stewart said masking in schools remains a charged issue and noted many communities are split over it.

"This is a polarized debate, and that's not changing anytime soon," he said. "We agree on safe, open and in-person classrooms. We disagree on the measures."

Christine Ross, the state's epidemiologist, said during the videoconference Wednesday the current situation was "a pandemic of the unvaccinated." She said the level of community transmission of the virus was high in all counties except sparsely populated Harding County. She said the southeast part of the state in particular was "a point of concern" with its high case numbers.

Ross also reported pediatric hospitals were seeing a sharp increase in child patients - even higher than the peak of the pandemic last winter.

She said Los Alamos National Laboratory's modeling team determined universal masking in schools would drop the coronavirus caseload in New Mexico to an average of 1,000 per day, compared to 1,400 a day for masking of just unvaccinated people.

Though the vast majority of COVID-19 cases are with the unvaccinated, some "breakthrough" cases are occurring with fully vaccinated residents - an indication of the vaccine's waning effectiveness over time. Vaccines continue to be highly effective in preventing hospitalizations and deaths. Booster shots probably will be scheduled in the fall.

A pediatrician said during the videoconference there is no evidence masks have long-term consequences for children with normal lung function. He said masks for children age 12 and younger - who are not eligible for the vaccine - are "the best and most effective technology we have" against the pandemic.

Several local boards seemed to have anticipated the indoor mask mandate even before it was ordered. The entire Tucumcari Public Schools board was masked during its Aug. 16 meeting, as was the Quay County Commission on Aug. 9.

The governor's order states all workers in hospitals and congregate care settings, including nursing homes and hospices, must be vaccinated against the virus, with rare exceptions.

Lujan Grisham said such workers must receive their first shot within 10 days and the second shot within 40 days of the first.

Religious and medical exemptions to vaccinations are allowed. However, unvaccinated workers affected by the order must undergo a weekly COVID-19 test, with a negative result.

Lujan Grisham also encouraged residents tho make fewer trips and errands to lessen opportunities for the virus to spread.

She was hopeful caseloads would level off in September or October and begin to decline in November and December. In the meantime, she said many New Mexico hospitals are under strain because of rising cases and a shortage of nurses.

"Make no mistake: We're in a terrible place with our healthcare workers," she said.

"I'm very concerned about what will happen in hospitals in the next three to four weeks," he said, adding some hospitals already were postponing surgeries for conditions that are not life-threatening.

Scrase estimated more than 90% of nurses and doctors already have been vaccinated against COVID-19.

When asked about whether coronavirus was spreading from undocumented immigrants from the Mexican border, Scrase said there was no evidence the Delta variant was coming from there, but instead from other places within the U.S..

Lujan Grisham said she agreed U.S. Homeland Security should screen for the disease more aggressively at airports and all U.S. borders but maintained the resurgence in the pandemic was a domestic problem.

"The risk factor is too many New Mexicans failed to get vaccinated," she said, in addition to not enough mask-wearing and too much risky activity.