Plenty of contested races in Quay 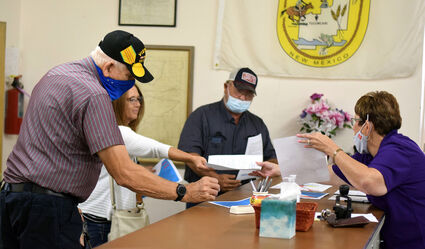 It appears Quay County will see contested races for Tucumcari municipal judge and for at least one seat each in Tucumcari, Logan, House and San Jon municipal bodies and school boards in the Nov. 2 election.

Aug. 24 was the lone filing date for all candidates in 30 local races, with Tommy Snapp the first to wait in line 45 minutes before the Quay County Clerk's Office could take his candidacy paperwork for Tucumcari municipal judge. Not far behind was Willis "Jack" Hendrickson, vying for the same seat.

Quay County Clerk Ellen White said Wednesday it appeared all the filed candidates met eligibility requirements. Write-in candidates also could file for local races on Aug. 31. Those who filed last week also can withdraw on that date. (The Quay County Sun's print deadline was before that time.)

For Tucumcari school board, Robert Lucero and Cassie Huffman are running for the District 3 seat. The current officeholder and school board president, Leif Gray, did not file for re-election.

Position 1 councilor for the Village of Logan will see a three-way race between Tom Humble, Jai Courtney and Brian Michael Cox. The current officeholder, Benny Newton, declined to run for re-election.

Incumbent Pam Slater faces a challenge from Jeremy Allen for Position 4 on the San Jon school board.

Incumbent Ronald McGee and John Snipes will vie for a two-year term as House village councilor.

For House mayor, Joe Patton and Eva Harding are facing off for that position. The current mayor, Sherman Martin, declined to run.

For House school board, Stoney Shoemaker and Lori Foust will contest each other for Position 2. The current officeholder, Rachelle Moon, declined to run.

The filing day also served notice for an imminent changing of the guard for several seats, in addition those already mentioned who apparently won't run for re-election.

Also, current Mesalands Community College District 5 trustee Liz Estrada did not file for another term. No one filed for her seat; the board later will have to appoint a replacement, barring any write-in candidates.

The Village of San Jon also will have to appoint two trustees after the Nov. 2 election, as no one filed for those seats.

An appointment will have to be made, as well, for Southwest Quay Soil and Water Conservation District's Position 4 after incumbent Cedar Rush did not file, nor did anyone else for that seat.

Below are the unopposed candidates in Quay County, barring any write-in candidates. All are for four-year teams unless otherwise noted:

Candidates are unofficial until Sept. 3. Terms are for four years unless otherwise noted.