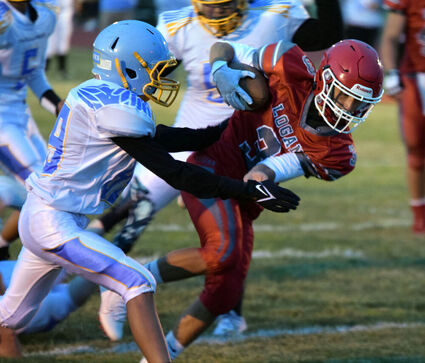 Logan running back Izaiah Kneitz breaks a tackle from a Dulce defender en route to a 4-yard touchdown run in the first quarter of an eight-man football game Friday at Logan. The host Longhorns won 60-0.

LOGAN - The host Longhorns in their home opener Friday so dominated Dulce, they took a two-touchdown lead before running an offensive play from the line of scrimmage.

Logan's Izaiah Kneitz scored three touchdowns - two on offense and one on defense - during his team's 60-0 victory in an eight-man football game that stopped at halftime due to the mercy rule.

Logan amassed only 155 yards of offense, mostly because the Longhorns had numerous short fields due to turnovers and Dulce's difficulty moving the ball.

• Logan's defense made 11 tackles for a loss.

Logan improved to 2-0 overall. Logan's game the previous week at Pine Hill ended in a forfeit victory when its opponent didn't have enough completed physicals.

"I've got a lot of new players in this game, basically freshmen and sophomores," Muniz said. "I have only about three to four players were experience. We're a young team, but there's still some potential there.

"This was a good wakeup call for us. We'll just have to pick ourselves up and move on to the next game."

The Hawks' biggest gains were two pass completions from quarterback Bob Harrison Jr. to wide receiver James Johnson for a total of 39 yards.

Save for an 0-for-6 passing performance, Logan assistant coach Kyle Griffiths had little to complain about. Griffiths is leading the Longhorns while head coach Dwayne Roberts is absent while caring for his seriously ill parents.

"I thought that everybody came out and played hard," he said. "We needed a game like that to see what we actually have this year. We did miss a couple of passes that were wide open. We had a botched snap. Other than that, I thought we were pretty clean."

On the Hawks' first offensive series, their first two plays led to a total loss of 15 yards and backed them to the 5-yard line. On the next play, Strong burst into Dulce's backfield and knocked loose the ball from Harrison. Kneitz recovered the pigskin just inside the goal line for Logan's first touchdown less than two minutes into the game. Kneitz rushed for the two-point conversion for an 8-0 lead.

Dulce continued to struggle on offense and punted. Hayden Judd gathered the kick and returned it 45 yards for another Logan TD. Brock Burns scored the two-pointer for a 16-0 lead.

On a fourth-and-long play in the red zone, Kotara scored on 10-yard run. Judd scored the two-point conversion for a 24-0 lead with 5:23 left in the period.

Dulce's next punt went barely 10 yards, and Payson Nials returned it to the Hawks' 21. Four plays later, Kneitz scored on a 4-yard run. The two-point attempt failed, but Logan sported a 30-0 lead with more than two minutes left in the quarter.

On its next possession, Dulce elected to go for it on fourth down and failed, giving the ball back to Logan on the Hawks' 29. Three plays later, Kotara broke several tackles on a 29-yard touchdown run. Judd scored the two-point conversion for a 38-0 lead with 11:39 left in the second period.

Strong tried a squib kickoff up the middle and recovered the ball himself. On the next play, Strong scored a 43-yard rushing touchdown, just 11 seconds after the previous score. The running play for two points was stopped short for a 44-0 Logan lead.

Dulce's next punt was so low, it hit a lineman in the back. Logan recovered it at the Hawks 30, and Kneitz scored on the next running play. Kaeden Stoner completed a pass to Burns for the two-point play and a 52-0 lead with 6:31 left in the half.

Ayden Kotara gathered Dulce's next punt and returned it 63 yards for a TD. The Stoner-to-Burns connection worked again for two points and a 60-0 lead with 2:58 left in the half.

With about a minute left, Nials intercepted a pass near midfield and returned it to the Dulce 12-yard line. Logan let the clock run out on the half - and the game - without running a play.