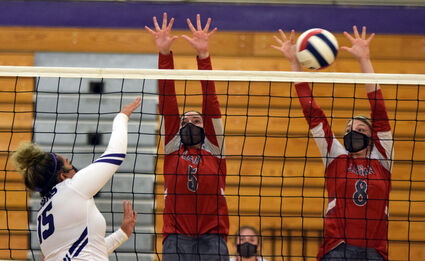 Logan's Camryn Cantrell (left) and Kaylee Williams attempt to block a shot by Santa Rosa attacker during the championship match Saturday of the Tucumcari Invitational.

The Santa Rosa volleyball team came from behind to conquer previously unbeaten Logan 18-25, 25-14, 25-22, 25-21 on Saturday to capture the Tucumcari Invitational title.