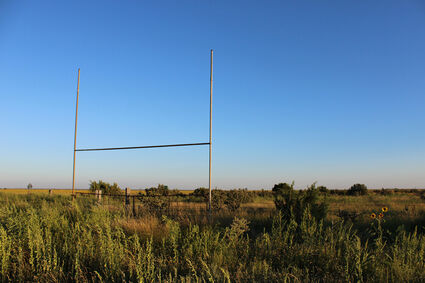 The practice goalposts at that Lewis Reagan and his father built more than 40 years ago still stand in Ragland. And the 58-yard field goal that Reagan kicked for the Tucumcari Rattlers still is in the New Mexico record books.

RAGLAND - On the edge of the caprock, a father and his teenage son built a makeshift set of goalposts that doubled as a pasture gate behind the village's general store.

It was here the boy, Lewis Reagan, practiced his placekicking for the Tucumcari Rattlers football team. Those practices paid off when, as a senior, he kicked a state-record 58-yard field goal - one of three that split the uprights that night - during a 22-20 upset victory on Oct. 23, 1981, over Lovington.

And those goalposts still stand like a sentinel behind the long-closed store in Ragland, which now is a ghost town.

Reagan, who also played center and middle linebacker for the Rattlers, said during a recent phone interview he began placekicking during his sophomore season. He used a special square-toed shoe for his kicks; those were the years before soccer-style kicking became common in football.

Tucumcari had a stout football team that season, going 13-1. Reagan recalled he was the second-highest scorer that year because he kicked "a whole bunch" of extra points after touchdowns, though he "hardly ever tried a field goal."

Recalling the goalposts at Ragland, Reagan said "me and my dad built that so I could practice in the offseason. It was just pipe we had laying around. Dad needed to put in some gate posts, so we just built goal posts and put a gate in between them to keep the cows in."

The goalposts he and his father Wendell built were five feet narrower than regulation, so the teen needed to be a touch more accurate with his kicks there.

Reagan admitted he did his best placekicking workouts at the Rattlers' practice field.

"It was harder to practice (in Ragland) because the balls kept going into the cow pasture," he said.

During his junior year, Reagan said the Rattlers suffered through an 0-10 season, and he "didn't get close enough (to the end zone) to even try a field goal."

By his senior year, Reagan said the Rattlers "started to get our legs back under us and scored better."

Lovington was heavily favored when it traveled to Tucumcari during a windy, cold night in October 1981. The Rattlers had other ideas.

Tucumcari fullback Troy Brown did much of the damage against the Wildcats, rushing for 257 yards and two touchdowns in 31 carries.

Reagan also played a crucial role in the victory. He booted field goals of 43 and 50 yards in addition to his state-record 58-yarder.

According to a contemporary report from the Quay County Sun, the record kick came late in the first half. Tucumcari faced a fourth-down-and-12 from Lovington's 41-yard line.

"Rattler coach Jerry Parent was going to have Mike Montoya punt but changed his mind and sent Reagan in for the mammoth field goal try," the report by Penn "Boots" Rabb stated. "Reagan hit it well, and it cleared the crossbar with a few feet to spare to make it 19-6 with 3:10 left in the half."

Though Rabb reported it being windy that night, Reagan recalled "there wasn't any wind to speak of" during his record attempt.

"We all knew I had the leg, but I had no idea how far it was when I kicked it," Reagan recalled. "The coach said, 'Kicking team,' and I went out and said to myself, 'This one's a little long,' but I had absolutely no idea where we really were. If somebody had told me, it probably would have gotten into my head a little bit."

Parent later told the Associated Press he also was unaware the kick attempt was in state-record territory. He said there was little downside to trying the kick.

Mike Rindahl of the Sun snapped the photo of Reagan's kick, with James Montoya as the holder.

Reagan kicked a 50-yard field goal later in the game to cement the victory.

Asked by the Sun about the long field goal after the game, Reagan said: "It feels good. It was just luck, I guess. The team had the blocks, and I couldn't have done it without them."

Reagan said Rabb informed him a few days later he verified that Reagan had broken the state field-goal record once held by Alamogordo's Ed Arnold's 55-yarder in 1966.

"It was a shock. I had no idea," Reagan recalled.

Reagan's big game wound up being picked up by the Associated Press, announced on ESPN and featured in Sports Illustrated magazine's weekly "Faces in the Crowd.".

"I had no thought of kicking beyond high school, but after that ..." he said.

Reagan finished the season 7-for-9 on field-goal attempts and earned Class 3A all-state honors as a kicker.

In front of college recruiters, he kicked a 55-yarder and just missed a 60-yard attempt, according to an Albuquerque Journal report.

Reagan said he turned down three full-ride scholarships from Division II colleges because they lacked the engineering programs he sought. He also turned down an offer from the University of New Mexico.

"I was a small-town kid and didn't like Albuquerque; it scared me," he recalled of rejecting UNM. "So I walked on at New Mexico State, and they'd never even heard of me."

Reagan said NMSU's coach didn't realize Reagan had kicked a state-record field goal until his second year there. He wanted to use a soccer-style kicker from California instead.

"By then, my leg was much stronger, but the only thing they let me do was kickoff practice with the return team," he said. "I had to kick off from the 20 for the return team to return it because I was kicking 80 yards or more. My field goals (in practice) were approaching 70, but the coach didn't care. He liked that soccer style.

"If I had been smart instead of a dumb--- kid, I would have taken those two years and learned how to soccer-style kick. But hard-headed, stupid youth didn't."

Reagan transferred to UNM because the team needed a kicker. By the time he got to the Lobos program, the entire coaching staff had been replaced.

"Everybody I knew at UNM was gone. I did transfer to UNM and got my degree there, but by the time I did, it was over (for me in football)," he said.

Reagan, now a civil engineer in the Dallas-Fort Worth region, remains amazed his record field goal is still in the books.

Many state records at the high-school sports level are surpassed in less than a decade. But four decades later, Reagan's kick endures.